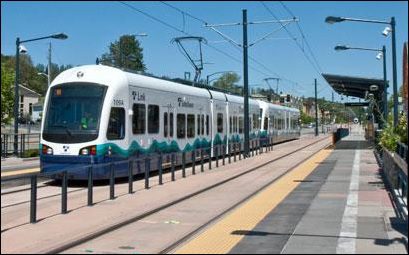 ​The U.S. Department of Transportation and Seattle’s Central Puget Sound Regional Transit Authority – known as Sound Transit – signed a $1.99 billion master credit agreement to cover four light rail projects, and the USDOT closed an initial long-term TIFIA loan of $615.3 million under the accord.

The USDOT announcement said its Build America Bureau financing unit developed the “first-of-its-kind arrangement” under which Sound Transit “will be able to expedite multiple loan requests under a single agreement with the federal government.”

capitol0816.jpgThe first TIFIA loan will go toward the local agency’s Northgate Link project, which is a 4.3-mile extension of the light rail system from the University of Washington Station to Northgate Mall, scheduled to open in 2021.

U.S. Transportation Secretary Anthony Foxx said that “with the use of a master credit agreement, the Build America Bureau can now negotiate one deal with entities that have multiple projects in their pipeline to gain access to federal loans. This has tremendous potential to save time and resources for infrastructure owners and to bring additional stability that can speed the investments that growing regions need today like the Northgate Link Extension project in Seattle.”

Sound Transit projected that it will accrue credit cost savings of $200 million to $300 million over the course of the 35-year, low-interest loans in the agreement.

“The people of Puget Sound are fortunate to benefit from strong partnerships with the U.S. Department of Transportation as we build the mass transit network our region desperately needs,” said Sound Transit CEO Peter Rogoff. “Securing the nation’s first master credit agreement will help ensure that more of our tax dollars are spent providing a path out of traffic than on borrowing costs.”

Rogoff was formerly the USDOT undersecretary for policy before leaving to helm the local transit system. Earlier, he headed the Federal Transit Administration for five years.

The master agreement also covers three more projects and the federal loans to fund them.

They include the Lynnwood Link, 8.5-mile extension from Northgate to the Lynnwood Transit Center, which is slated to opening in 2023 with help from a $657.9 million TIFIA loan.

A Federal Way Link Extension under the plan will run 7.5 miles from South 200th Street in the city of SeaTac to the Federal Way Transit Center, opening in 2024. Its loan amount is $629.5 million.

And the deal includes a loan of $87.7 million for a new operations and maintenance facility to support the growing light rail system serving trains to Lynnwood, Bellevue/Overlake and Kent/Des Moines.