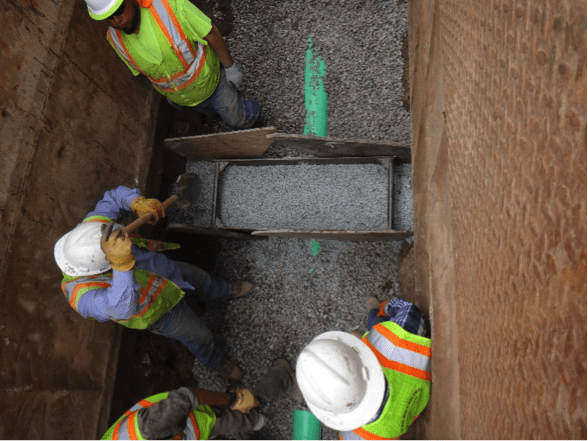 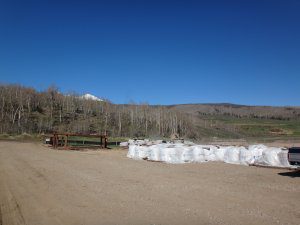 When storing AquaBlok material onsite, it should be tarped and protected from the elements.

Land to be used for a housing development in Silverthorne, Colo., was originally homesteaded in the 1860s as ranch land for hay production and grazing Scottish Highland cattle. Although the ranching tradition continues on the property, a portion was recently set aside for construction of a new housing development.

The property is located on the slope of a mountain, with some sections of road traversing steep slopes. Per local codes, all new sewer lines being installed must have trench dams placed at an interval equal to the quotient of 200 feet divided by the slope. Due to the property’s steep slopes, a large number of trench dams were required.

Benefits: Placing trench dams across and along pipe trenches impedes the movement of groundwater along the outside of the pipe and through the trench, reducing erosion potential and minimizing potential degradation of the pipe bedding.

Conventional trench dams often are constructed using a variety of local materials, including soils, but this can be time consuming and technically problematic. Achieving uniform soil compaction around the trench dam can be difficult, which can lead to worker safety issues. In addition, without quality materials and sound installation methods, achieving the required low permeability can be challenging and sometimes impossible. 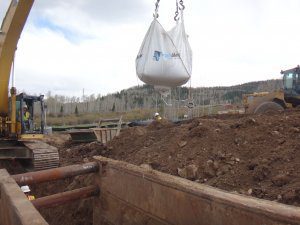 Excavators were used to move bulk bags of material that were placed into the trench dam form.

Pipe slope directly impacts the frequency of specified trench dams, and the housing development being constructed had such steep slopes that it sometimes required trench dams every 20 feet. This would have required an inordinate effort using soils.

AquaBlok 2080FW#8 (PONDSEAL) was selected because the material is a pourable dry particle that self-seals when hydrated, and no mechanical compaction is needed to achieve the target permeability (hydraulic conductivity). Approximately 195 tons (nine truckloads) were shipped to the project site in 2,700-pound bulk bags to be used in the trench dams. Because the material self-seals when hydrated, no mechanical compaction was needed.

To ensure the “seal” is maintained all the way around the pipe, the contractor chose to fill a small form below the pipe–before hydrating the material. Following installation of a base layer, material could be gravity dropped around the pipe and into the trench dam form. 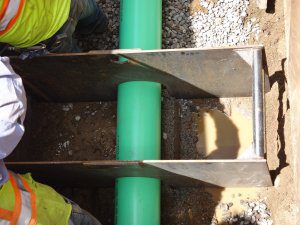 Trench dam forms were positioned prior to adding AquaBlok material.

Each AquaBlok trench dam was constructed in less than 20 minutes at the beginning of the project, with times decreasing as the crew became more experienced. The most time-consuming components were the relocation of the small form as well as separate placement of an initial bedding layer of material below the pipe–an optional step that was performed to ensure the material would seal all around the pipe. Had material just been gravity dropped around the pipe into the form, each trench dam would have taken dramatically less time to construct