Collect Data Once, Use Whenever Needed: Mobile-Mapping Systems Create Quick and Detailed 3D Models of Infrastructure

European engineers have long been at the forefront of scanning and infrastructure technology, being much faster to adopt all-digital workflows than most of their American counterparts.

One of these technologies is mobile mapping, which is typically a combined system that includes GNSS satellite positioning equipment, inertial measuring units, distance measuring, 3D laser scanning and some form of digital imaging. All of this is combined in a mobile platform such as a car or truck; rail car; or airborne in a plane, helicopter or often now an unmanned aerial system (UAS, or drone).

Complete mobile-mapping systems combine all of this sensory information into 3D models that include point clouds, imagery and geolocated data that can be used for mapping, understanding current topography and infrastructure asset management, among other uses.

One such provider of mobile-mapping services is Grunder Ingenieure AG, which is based in Burgdorf, Switzerland, a German-speaking portion of the country. The company performs a wide range of services for a diverse clientele, including civil and road engineering, railroad engineering, building surveying, monitoring and forensic applications.

They’ve been successful partly because they were one of the first engineering companies to offer mobile mapping in the area, but also because the technology delivers results.

“You get a virtual reality in a very fast, safe and mobile way directly delivered to your office,” notes Gilbert Roulier, a surveying engineer at Grunder Ingenieure. “Mobile mapping can deliver almost any deliverable a client might want, and there’s no need to perform subsequent required outside measurement checks.” 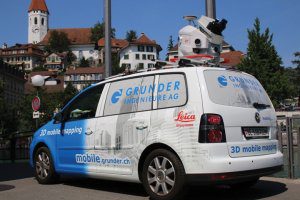 “You can bring the reality, through images and point clouds, into the office, which make it possible to generate almost countless products,” he says. “It’s interactive, in 3D and in true colors. You can cover a large area in a short time and in a safe way.”

The company also added a Leica Pegasus Stream system, which performs underground radar penetration, to be able to collect the locations of underground pipelines and other assets without anyone having to dig.

Roulier admits that the systems are large, heavy and somewhat complicated, but with a little practice become easy to use, and they perform data collection in a fraction of the time it would take separate systems to gather. He also notes that customers appreciate the output, but they don’t always understand that it’s not easy to do what they do. 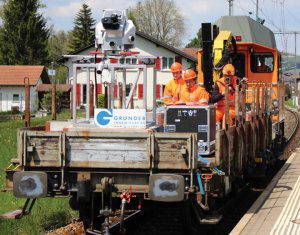 The same Leica Pegasus:Two system can be moved to a 3D mobilemapping hand cart (right) or a railroad trolley (above), depending on the project.

“When you talk with customers, they often believe there’s this ‘magic 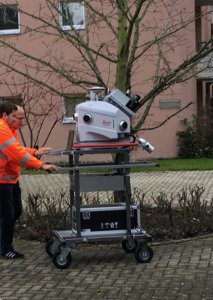 button’ that delivers the desired end product,” he notes. “There’s still a lot of manual work involved as well as the use of several software programs.”

Different projects require different mobile configurations. It’s a very different setup on a car on a road as opposed to a rail car on a track. Some projects require two GNSS antennas, while others only one. Some require collecting reference points, while others do not. The resolution, accuracy and measuring angle all can change depending on what’s needed for the individual project.

“It all depends on the required accuracy and the final product that the customer wants,” adds Roulier.

To truly understand how a mobile-mapping systems works in the realm of infrastructure, looking at a few of Grunder Ingenieure’s more high-profile projects may be the best way to see how the system fully integrates its data collection. 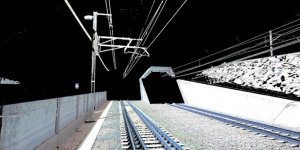 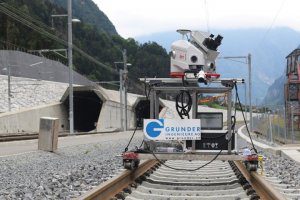 Rail surveying is a core business for Grunder Ingenieure, as Europe has tens of thousands of miles of rail lines. The Gotthard Tunnel in Switzerland is the world’s longest rail tunnel at a length of 57 kilometers (35 miles). In addition, there are about 50 kilometers (31 miles) of new outdoor tracks on either side of the tunnel.

Roulier and his team were tasked by the Swiss Federal Railway to model the rail lines and the surrounding objects.

“Our biggest challenge was logistics and actually getting onto the tracks, and that’s why we used the mobile mapping system,” he notes. “We had incredibly tight timescales, and every stakeholder wanted to get on the tracks to finish their work. We only had a few days to capture 30 kilometers. The conventional way would not have been possible.”

After surveying the lines in a quick and accurate fashion, the company was given additional work, such as capturing the catenary wires overhead that power the trains. They also delivered a digital terrain model (DTM) so the developer could plan temporary platforms. 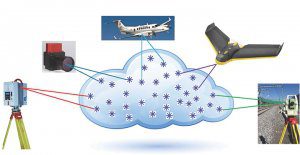 For the end product, and especially for customers, it’s irrelevant how the 3D data are collected

The city of Bern, Switzerland, was looking to evaluate 3D mobile mapping and considered several possible ideas for pilot projects. It so happened that the Tour de France bicycle race was coming through town for two stages that year, so it was decided to test the technology by modeling the route the riders would take.

Race organizers require a 6-meter-wide corridor to maintain the safety of their athletes, and it can often be a difficult process to measure Europe’s sometimes narrow roads and flag any obstacles or problem areas that may need to be removed or protected before the race begins. The mobile mapping system made the process quick and easy.

“It was possible to use the mobile-mapping point cloud to identify all the obstacles,” says Roulier. “The planners could decide afterward if the obstacles have to get removed, protected or marked.”

He adds that this project was relatively simple technologically, as the surveying didn’t require any reference points. Using GNSS accuracy was sufficient for this high-profile case study.

Although mobile mapping aboveground is a proven and extremely accurate form of modeling, measuring infrastructure below ground has many differences, and much of the data analysis and evaluation are still manual processes.

Grunder Ingenieure uses a real-time tomography system that’s similar to what geologists have used for some time to detect what’s in the Earth. During analysis, the operator digitalizes the peaks of the parabolas in the ground map, cross section or longitudinal views. These then are synchronized to reveal underground details.

Decimated triangulations for digital terrain calculations (above) were used to plan the construction of temporary platforms along the train line. Evaluated CAD drawings (below) show the longitudinal and cross sections as well as a top-view plan.

To identify potential obstacles, a 6-meter-wide corridor (green) was created along the riding route for the Tour de France in the city of Berne. 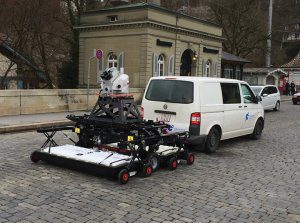 The Leica Pegasus:Two was combined with a Pegasus Stream system (above) to capture additional ground-penetrating radar (GPR) data on the Nydegg Bridge in Berne. Software for GPR analysis (right) shows three synchronized views (cross section, top view on a defined altitude, longitudinal section) as well as the 3D view. The parabolas show a GPR obstacle, which usually means a pipe.

“It takes a while to get used to the tomographical radar images,” notes Roulier. “The deeper you’re looking into the ground, the more you sometimes have to assume that you’re looking at a pipe. As a surveyor, you’re used to being 100 percent sure that you are correct. That’s not possible with ground-penetrating radar—until you start to dig.” 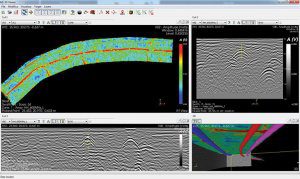 Of all the benefits Roulier has discovered with mobile mapping, he points to a single one as the most important: Collect Once, Use Anytime.

By this he means that a client can have a small, specific item they’d like scanned and modeled. But mobile mapping is so scalable and quick, once you start, it’s just as easy to collect data from a much larger area, modeling every aspect of the surroundings.

Engineers then can easily parse out that original specific item for a client and give them what they need. But if they ever need more information or want to widen their scope, which happens regularly when clients see the deliverables, it’s just as easy to deliver anything else from the data that was already collected.

“With 3D mobile mapping, you capture everything,” adds Roulier. “The customer doesn’t need to know exactly what they want at the time of collection, or which direction the final project is heading. If there are any changes, it’s not necessary to do any further surveying.

“If a customer wants something new, no problem,” he says. “We already have it.”