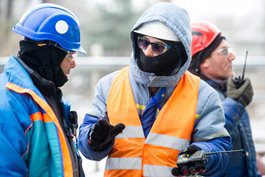 Bechtel, the global engineering, construction, and project management firm, today congratulated an international team for completing a historic milestone at the site of the Chornobyl nuclear plant: the successful sliding of a massive containment arch that now covers the plant’s damaged reactor. Bechtel led the consortium that designed the massive arch on rails to be built in segments, joined together, and slid over the reactor. With end walls added to both sides, the arch will keep the radioactive contamination contained while keeping rain, wind, and other weather out.

The arch is the largest movable structure on land – massive enough to cover several Statues of Liberty or the entire Cathedral of Notre Dame. The sliding was completed earlier this week, with more than 200 jacks pushing the arch along the rails and into place, about 30 inches at a time.

“This achievement is the result of great teamwork and creativity,” said Oscar “Mac” McNeil, Bechtel’s project manager at the Chornobyl site. “No one has ever put a giant structure over a damaged nuclear reactor. The team of Ukrainians, Americans, French, British, Georgian, and Czech nationals has made history together, adding another chapter to an event that affected so many lives.”

Chornobyl’s reactor No. 4 melted down in 1986. A concrete covering hastily built over the reactor has developed cracks and become unstable, prompting the need for a longer-term solution.

Today, Bechtel’s role, under contract to the State Specialized Enterprise – Chornobyl Nuclear Power Plant, is to ensure that engineering and construction meet the plant’s strict quality requirements. Also playing key roles on the team are the French construction consortium Novarka and the European Bank for Reconstruction and Development, which has financed the project along with 40 donor nations.

The arch: ◾weighs 40,000 tons
◾measures 345 feet tall, 540 feet long, and spans 840 feet
◾is made of more than 80 elements held together with 600,000 bolts.
“Workers at the site endured some of the harshest conditions imaginable,” said Barbara Rusinko, president of Bechtel’s government services and commercial nuclear business. “They worked through extreme cold and had to closely monitor exposure to radiation. From initial excavation in the late 1990s to this week’s sliding, the achievement is truly remarkable.”

Bechtel is a leader in environmental cleanup and restoration of former nuclear weapons production sites and decommissioning of commercial nuclear plants. The company’s unparalleled experience spans nearly 40 years and includes the cleanup, remediation, and closure of nuclear waste facilities in the states of Washington, Idaho, New Mexico, Tennessee, Nevada, and South Carolina in the U.S. and at the Sellafield site in the UK.