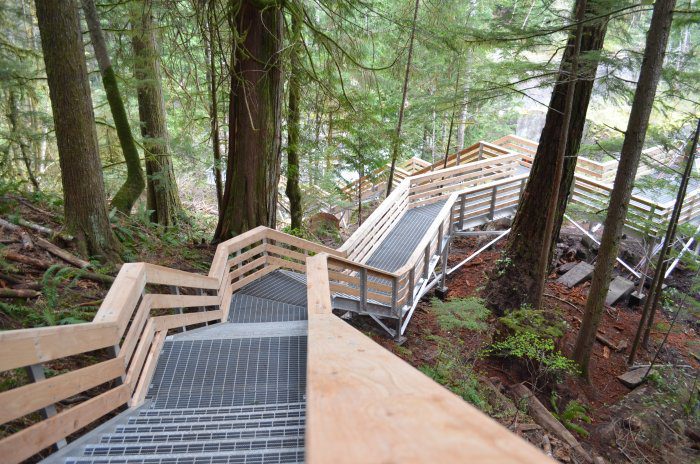 Elk Falls, beautifully cascading for 89 feet (27 meters), is the centerpiece of Elk Falls Provincial Park on Vancouver Island. By all accounts, it’s one of Canada’s most-scenic waterfalls, but for most of the park’s existence, Elk Falls has been underappreciated simply because it’s difficult to see. The falls tumble down into a small, misty, heavily wooded and very steep canyon with no trails, and only the very agile and slightly reckless can scramble to vantage points that allow good views of the park’s hidden treasure.

That changed in May 2015 when the Elk Falls Park Suspension Bridge was opened, culminating a design process that was begun in 2009 by the Rotary Club of Campbell River. The new pedestrian bridge, just downstream from the falls and 210 feet (64 meters) over the Campbell River, now facilitates secure access and good views for most visitors, with enough vertiginous sag and sway to make the trek especially thrilling.

Installing infrastructure in natural areas can be controversial, but in the case of this new bridge, no one seems to be worried about it. As quoted in the Campbell River Mirror, British Columbia Minister of the Environment Mary Polak said, “My mother was a paraplegic, and when I grew up, we very much liked outdoor experiences. But nine times out of 10, we would get somewhere, and dad would have to take us to the more-interesting places, while mom sat in the car because you just couldn’t go there.

“To see a place like this, that has been designed so people who have mobility challenges can still enjoy the natural beauty you have here, I just want to commend all of you that have been involved for putting that lens to this project,” she added. “You have no idea what that means, not just to the people who are having mobility challenges, but to their family and friends who would really like to enjoy these spaces together with them.”

And it’s not just Polak and other officials. News coverage is overwhelmingly positive, locals love it, and the new bridge is expected to attract an estimated 140,000 new visitors per year while injecting up to $5 million annually into the local economy.

Much of the universal acclaim likely comes down to the functional-but-beautiful aesthetic of the bridge and viewing platform, which rival the falls themselves as attractive objects in the landscape. Sensitively constructed of steel anchors, aluminum stair and support frames, galvanized steel grating from Nucor (Fisher & Ludlow in Canada), and naturally finished red cedar railings, this is exceptionally solid infrastructure that seems to sit lightly in the canyon. There is a pleasing fitness to the project—not too much, not too little.

It almost looks easy; but as designer/build partners Herold Engineering Ltd. and PACIFIC Industrial & Marine Ltd. point out, making it look easy is the difficult part.

“Just moving materials around this site was a challenge, and we used helicopters at several stages,” explains Sean Orr, PACIFIC project manager. “And for safety reasons, our crews were often in safety harnesses while working.

“Siting support footings on a steep, slick hillside, while working around tree roots and rock outcroppings, was a major challenge, and we had to redesign quite a bit during construction,” he adds. “There were days when the upstream hydro dam was letting out excess water, and we had to stop work simply because everyone was getting soaked by mist, even in rain gear.” “Our initial site visit was basically just a walk in the woods,” notes Orr. “We also had an artist’s rendering of the Rotary Club’s vision to work from. That was enough to realize that a relatively lightweight, low-impact structure was needed. We realized pretty quickly that an aluminum frame and support structure was called for.”

A major advantage of the aluminum main structure was how the relatively lightweight configuration eased construction logistics.

“Helicopters were essential on this project,” explains Orr. “We used them to fly cables across the canyon and to fly in suspension bridge towers, and occasionally we used a helicopter to move big pieces and drilling equipment around onsite. But we also used zip lines and pulley lines extensively. Given the steepness of the site, light materials were definitely an advantage.”

Lightness also helped with a construction process that turned out to be unexpectedly iterative.

“There was a lot of rework and redesign on this project, and that was a surprise,” adds Orr. “It turned out that support footing placement was very unpredictable—we had to avoid large root clusters for a lot of reasons, while also taking advantage of rock outcroppings, and that meant we had to choose footing locations as we made progress. Basically, we redesigned more or less constantly as we built.”

This meant that shop drawings and detailing for grating and other components also were being completed during construction, in response to changing conditions. For example, PACIFIC ordered the Nucor grating in three different cycles.

“Fortunately, Nucor was able to work with our drawings and get us the custom grating we needed with turnaround times of just two to three weeks,” says Orr. “At the end of the project, we were extremely happy with the way everything fit together.”

To place supports in soil, a lightweight—just 90 pounds—screw pile machine was moved around onsite to install finned, 1.5-inch poles. “In rock, we could drill,” notes Orr. “But in soil, the lightweight machine was a big help, and screw piles worked extremely well.” One critical component, however, couldn’t be aluminum. “Aluminum was just right for the stair frames, platforms and walkways,” explains Orr. “In addition to lightness, aluminum let us build relatively wide platforms and build a bridge with a generous walkway. But that meant we needed galvanized steel grating for the bridge and deck. Other materials might have been technically OK, but we felt that the sturdiness and weight of steel was important here. And the grip on the treads was also a factor.”

In other words, psychological reasons were considered—when people are walking across a swaying, sagging bridge 210 feet over a rushing river, or standing on a platform cantilevered over a steep hillside, they want to feel some excitement, but they also definitely appreciate the security of solid, non-slip steel grating underfoot. Working from PACIFIC’s shop drawings, Nucor fabricated grating and decking precisely to order in short timeframes.

“Our gratings are more commonly used in industrial settings, such as catwalks in plants, so it was nice to be working on such a beautiful outdoor project,” says Kyle Kilbourn, Nucor branch manager. “The individual pieces were fabricated in our Surrey, British Columbia, branch. The walking surface of the bridge is constructed from Nucor’s Grip Span safety grating and our grating clips. The north-side landing area and steps are constructed of Nucor’s bar grating to offer solid footing while giving tourists a great view beneath their feet—that contributes to the thrill.”

Altogether, Nucor supplied 100 custom-fabricated pieces of grating, and Orr says everything fit together perfectly onsite, with little need for modification during installation. That didn’t surprise Kilbourn.

“We’re very careful with our quality control during fabrication,” he says. “Galvanizing is checked twice, and all dimensions are carefully checked as well. We have a good reputation for quality and safety, and we want to keep it that way.”

For his part, Orr says Nucor was the only grating supplier considered. “To be honest, it’s just some of the best grating available,” he notes. “The weld quality and sturdiness is superb, and the Grip Span was perfect for this job. And installation of the bridge decking was extremely straightforward—basically, we just slid the pieces out on the rails and clamped them in place. Given the height and exposure on this project, that was appreciated.”

PACIFIC crews were onsite building the bridge and viewing platform in difficult conditions for eight months, but the construction shouldn’t obscure the contributions of other stakeholders. The Campbell River Rotary Club deserves kudos for this extraordinary civic act, a work of foresighted generosity that will enrich the lives of islanders and visitors for generations.

Through six years, the club assembled funding from several sources, including the Island Coastal Economic Trust, funded by the provincial government, in the amount of $325,000; Canadian utility company BC Hydro in the amount of $150,000; a federal government grant of $86,650; and $124,500 of internal fundraising. BC Hydro, which has been working in the area on a Generating Station Replacement project, also provided Rotary with copies of topographical and geotechnical reports, which saved the Rotary Club time and money.

This wasn’t an easy project, and it wasn’t cheap either—even with a lot of pro-bono work from BC Hydro, Herold and PACIFIC, total project costs came close to $750,000. But given the project’s success and beauty, the price tag likely will strike most visitors, and appreciators of good public infrastructure, as quite a bargain

Comments are disabled
NEXT ARTICLE
Video: Transportation Projects in Connecticut and Florida Win Top National Awards
December 19, 2016
PREVIOUS ARTICLE
From the Editor: Celebrating the Work We Do
December 19, 2016