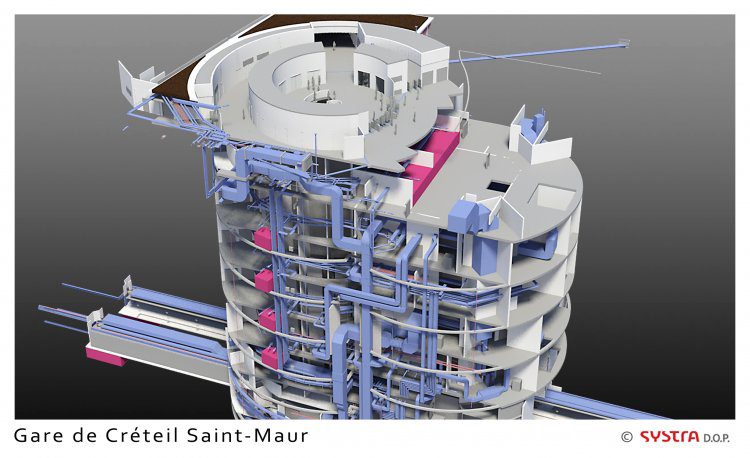 When the original Paris Metro system was built more than a century ago, it connected all the most vital parts of the city. But Paris has changed a lot in 116 years. Now outlying neighborhoods are home to Europe’s largest business district, the world’s largest produce market, several universities and areas with denser populations than Paris itself.

The Grand Paris Express (GPE) aims to ease travel to and from these outlying neighborhoods by adding four new metro lines, extending two existing lines, and adding 65 additional stations to the greater Paris metro area—also known as the Île-de-France. When completed in 2030, the system will enable travel among important outlying areas without going through Paris in the center. It will also effectively double the size of the Paris metro system.

Although it’s a historic project by any measure, it’s also one of the first infrastructure projects of this scale to use Building Information Modeling (BIM) from start to finish. With six architectural and civil engineering design firms participating in the project, and all of them producing 3D models instead of traditional 2D design content, the GPE is taking BIM for infrastructure to a whole new level.

This paradigm shift requires new and evolved methods and tools. Autodesk software applications such as AutoCAD Civil 3D civil engineering design and documentation software, and Revit BIM software played a major role in enabling the rich 3D modeling and cross-project collaboration that are fundamental to the BIM process. According to Lucy Kuhns, a civil engineer with Autodesk providing technical support on the project, “While BIM has seen wide adoption for architecture, infrastructure has been several years behind.” The Gare de Créteil Saint-Maur is one of 65 new stations added as part of the Grand Paris Express, effectively doubling the size of the Paris metro system.

SYSTRA, an international engineering firm headquartered in Paris, is responsible for several parts of the project, including tunnels, several stations and a rail maintenance facility. It’s the first time for everyone at the firm using BIM in this way, and there continue to be many lessons learned.

Because it runs through a densely developed and populated urban/suburban environment, roughly three-fourths of the GPE will be underground, and not just a bit underground—as much as 40 meters below the surface in some places. Wells dug every 800 meters provide ventilation and access during emergency situations. A 3D rendering of the design for the Gare de Créteil Saint-Maur, a new station that is part of the Grand Paris Express.

Creating the 3D model of the surface, geologic strata and man-made structures in and around the project was a real challenge, but once they had it, it made many tasks easier, according to Kuhns. It enables engineers and developers to visualize the subterranean features more easily, compared with the previous process of making numerous 2D sections or cuts, and provided a clearer representation of how the tunnels, trackways, utilities and ancillary structures all fit together.

In fact, it enables them to provide a clear picture of how all the components interact and behave with each other. With the 3D presentation, even the most non-technical stakeholders can understand the design intent. In a 3D model, one can easily see and simulate where water would flow or smoke and fumes will rise.

BIM also sped up some tasks significantly. Adding another fault to the geotechnical data was so easy “the geotechnical engineer’s jaw dropped,” says Kuhns. “With the old process, it would have taken many hours to generate a revised set of drawings. With BIM, we entered the new data and updated the model in a matter of seconds.”

The Société du Grand Paris, the organization in charge of the project, set high standards for design. And building as many as six stories underground placed large structural constraints on design and execution.

“It’s difficult to get light to go down six stories,”
notes Sylvie Cassan, head of BIM deployment and development for SYSTRA. But with BIM, she says, “it was much easier and very interesting to see all the constraints in one view.”

A First Time for Everything

All the BIM data from every firm involved in the project has been consolidated into one vast 3D digital model, and if you go to the offices of the Société du Grand Paris, you can actually explore it. It covers an area of 12,000 square kilometers, with digital models of more than 1 million buildings and 200 kilometers of new tunnels. Such a massive and unified model is a first for every firm involved, possibly for the industry as a whole.

“It wasn’t a question of whether it was faster or slower [with BIM],” says Lionel Fabre, an Autodesk BIM consultant on the project. “The challenge was simply to achieve it at all. And it worked—that’s the achievement.”

Each aspect of the project is in a different stage of completion, although construction is underway for most of them. The first part of the system is expected to open for business in 2022.

Author’s Note: Learn more about BIM and its impact on the Grand Paris Express online at au.autodesk.com/las-vegas/overview.