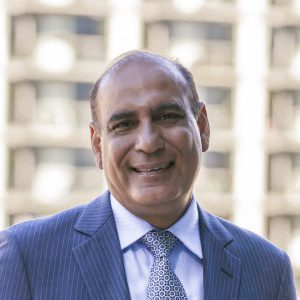 Having experienced what it was like to live in a refugee camp in India and grow up with limited resources such as power, water and food, Ahuja dedicated his life’s work to sustainability and leading a movement to design cities and systems that will protect the earth and the people who live on it.

I2: Why do you consider yourself a Smart Cities guru? Could you describe some of your background and why that term fits?

Ahuja: I grew up in India, where I lived in extreme poverty for a long period of time, especially with water and food. Then I traveled the world–114 countries–and I wanted to make people aware that yes, we have manmade structures, but the structure of nature is very important to understand. You need to have a love of technology and biology at the same time to understand it and do it right.

I2: What are some of the specific things you would like to change?

Ahuja: Suburban living, because suburban living has caused more pollution, and a lot more cars have choked the highways and everything else. So I am promoting urban living, where everything is where you live–even vertical farming, not just horizontal farming. You can have hydroponics in high-rise buildings, you can grow food aboveground and grab a fresh tomato, or cabbage or lemon in the high-rise buildings. So it’s all there; we’ve been doing hydroponics and ecoponics now to grow vegetables and fruits. That’s something I want to bring to understanding, beside the greenery and green roofs. Living in nature, not just concrete structures.

I2: What are some career highlights in terms of trying to make those things happen?

Ahuja: Humans did a lot of work in the LEED area; platinum buildings, quite a few of those projects using methods of all kinds. Managing the system properly, not sub-zero living. Sub-zero living is not a life; it’s bored to death. So I want to make people aware that everything we have on the planet is a finite amount: water, minerals, metals, oil. The only thing that is infinite and comes to the planet is sunshine, and that’s the only thing that comes from the outside, since the creation of the planets 4 billion years ago. Nothing has changed, we drink the same water dinosaurs drank; we’ve got a finite amount of water that recycles itself–that’s all it does.

I2: Tell me more about the book you’ve published, Integration of Nature and Technology for Smart Cities. How did you see nature and technology integrated and intertwined, and where did you first make these realizations?

Ahuja: I put a solar-tracking system on a sunflower–a little chip I put on it. The sunflower tracks the sun better than technology does, because the sunflower moves as the sun moves throughput the day, and then tilts down and up. I used that to understand the tracking of the sun. That means I’m learning from nature, how nature uses natural light or natural resources. That element of understanding was vital to live with nature.

The first 12 years of my life, I had only one glass of water for the whole day. I understood that I could live without food for two days, but not without water. So I have a very special affinity of bringing the natural understanding of the resources of the planet, and integrating the technologies we have now to make everything smarter–smart is the new green. That’s what I call it. Green is an old word now. Smart is the new green.

I2: Do you think technology imitates nature because humans create the technology, or are there certain underlying fundamental principles impacting nature and technology in similar ways?

Ahuja: I think it’s a combination of both. Technology imitates nature, biomimicry and other methods and means. At the same time, if you don’t work in sync, we destroy nature.

As we know, the climate has changed. The world is talking about the greenhouse effect and global warming–all of that has become a political statement for every part of the world. It is weary to not understand nature. It’s ignoring nature, and I’m saying “integrate the nature, don’t ignore it.”

I strongly feel that we learn lots of wrong system study. I have a whole human body and building synchronization section in the book. I have written plenty about that. How temperatures in the body affect the body, and we do the same thing with buildings, in a similar way with how the body does.

I2: What are some of the key lessons for the designers and builders? What can they learn from nature to make their creations better? What are some of your favorite examples that you would tell people to try and apply?

Ahuja: One of the things I try to apply is to not overdo technology, and at the same time collect data to make change happen. I’m a big believer of Big Data mining that is now big business vs. Big Earth mining.

So my thing is about using the materials within local areas within 50 miles, growing food within your own buildings, on the roofs or on different floors of the high-rise buildings. I believe that’s the future. The future will be urban living; all of the millions will be living in urban more than suburban, and then there will be sub-country and urban, no suburban in between. Suburban is a failure; that model failed–caused a lot of problems.

I2: In your opinion, what would be some common mistakes you’ve seen in city buildings that you think could be improved relatively easily?

Ahuja: The biggest problem I continue to see is not making projects based on lifecycle cost vs. doing first cost; make it cheaper, faster, back to the market, sell the building. That is still a big challenge to change that mentality of business, of flipping the buildings. That’s one problem that I see.

I live in an apartment, and I have seen so many times the same rulebook ripped apart every two, three months, because somebody forgot to put in a water pipe, and then they put it back again, or gas pipe, or utility line, whatever other projects that are assured to be done. They are coordinated with the other departments. So this lack of coordination of different departments in the city and federal and state levels is a huge drain on the system, and that’s where integration doesn’t take place. That’s a big challenge. That’s very political and difficult to realign all those departments in one agency.

I2: One final question. If you were giving advice to a young civil engineer, what would it be?

Ahuja: I would tell them to focus on green infrastructure vs. hard-surface infrastructure. Use bioswales for stormwater management; stream creation for some urban environments; adaptation in a different way, so we don’t build large-scale water-pumping stations and collections.

Mother Nature manages the water, like in the forest or other areas. We need to understand that there’s no need to make hard pavements. Perforated permeable roads and pavements can manage the water, and there will be no floods; they just seep through the ground and keep the aquifers charged up properly. That’s something I want to tell all the civil engineers that learn the natural cycle: the civility of nature in your civil design, and bring green infrastructure in your designs.