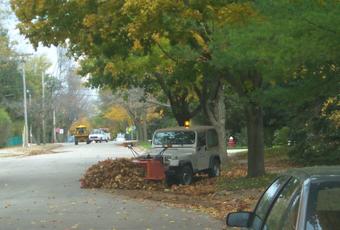 The timely removal of leaf litter can reduce harmful phosphorus concentrations in stormwater by over 80 percent in Madison, Wisconsin, according to a recent U.S. Geological Survey study.

Autumn leaf litter contributes a significant amount of phosphorus to urban stormwater, which then runs off into waterways and lakes. Excessive amounts of nutrients like phosphorus and nitrogen can cause eutrophication, or the depletion of oxygen in water, resulting in death of aquatic animals like fish. The USGS-led study found that without removal, leaf litter and other organic debris in the fall contributed 56 percent of the annual total phosphorus load in urban stormwater compared to only 16 percent when streets were cleared of leaves prior to a rain event.

“Our study found that leaf removal is one of the few treatment options available to environmental managers for reducing the amount of dissolved nutrients in stormwater,” said Bill Selbig, a USGS scientist and the author of the report. “These findings are applicable to any city that is required to reduce phosphorus loads from urban areas.”

The city of Madison used municipal leaf collection, street cleaning and leaf blowers to remove leaf litter from residential areas, and asked residents to pile their leaves adjacent to the street to limit excess debris. (USGS)

During April through November of 2013 through 2015, scientists compared concentrations of phosphorus and nitrogen in stormwater from two residential catchments in western Madison that had similar tree cover. The city applied a leaf litter removal program from late September through mid-November at one site but not the other. The researchers found significantly lower amounts of phosphorus and nitrogen at the site where leaves were removed.

The study also found that stormwater nutrient levels were highest during the fall months when the amount of organic debris on streets was at its peak. This finding suggests that leaf removal programs are most effective during fall in Madison, and that sources other than leaves, such as street dirt and grass clippings, were likely the primary contributors of phosphorus and other nutrients during spring and summer.

“The efficiency, frequency and timing of leaf removal and street cleaning are the primary factors to consider when developing a leaf management program,” Selbig said.

During the study period, the city of Madison used municipal leaf collection, street cleaning and leaf blowers to remove leaf litter from residential areas, and asked residents to pile their leaves adjacent to the street to limit excess debris. Leaf collection and street cleaning occurred about every seven days from late September through mid-November.

The USGS collaborated with the City of Madison, the Fund for Lake Michigan and the Wisconsin Department of Natural Resources on the study.