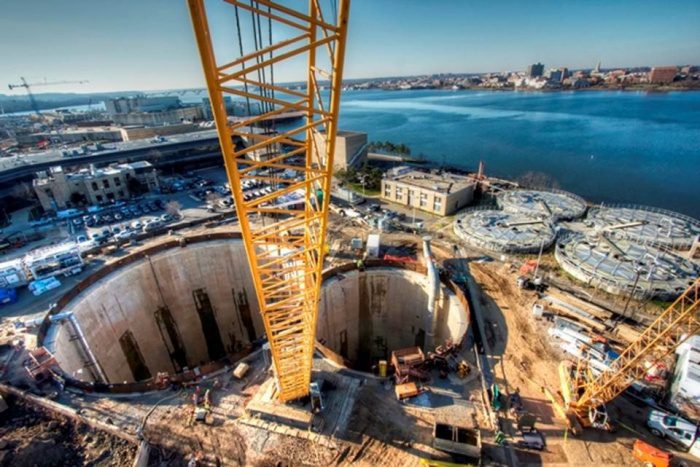 DENVER, Nov. 14, 2016 – The District of Columbia Water and Sewer Authority’s (DC Water) Blue Plains Tunnel has been selected as the recipient of the 2016 Best Project Overall award for the Mid-Atlantic Region by Engineering News-Record (ENR). The project was selected best overall from among the winners of nearly 20 different award categories and won additional distinction as the Best Water/Environment Project of 2016. ENR’s annual competition recognizes project teams for their ability to overcome challenges, as well as the project’s overall contribution to the industry and community, safety and construction, and design quality.

CH2M served as the lead designer for the design-build contractor Traylor-Skanska-Jay Dee Joint Venture who worked on the $330 million contract. The Blue Plains Tunnel was completed in January 2016 as part of DC Water’s $2.6 billion DC Clean Rivers Project to keep overflow from entering the Anacostia and Potomac rivers, and Rock Creek in Washington, DC. The Clean Rivers Project will reduce stormwater overflows and CSOs throughout the system by 96 percent annually and by 98 percent for the Anacostia River alone.

The Blue Plains Tunnel included a 24,000-foot-long, 23-foot internal diameter combined sewer overflow (CSO) tunnel constructed in soft ground under and adjacent to the rivers in Washington, DC. Five shafts were constructed for the tunnel—two of which were a 132-foot diameter dewatering shaft and a 76-foot diameter screening shaft. Both shafts, located at the Blue Plains Advanced Wastewater Treatment Plant, are between 180 and 198 feet below ground and were designed as a combined figure eight diaphragm wall structure. This unique design allowed for the tunnel boring machine to be assembled through both shafts and eliminated the need for a mined tunnel to be constructed to connect the two shafts.

“The award-winning Blue Plains Tunnel has been recognized for its innovative design and construction techniques, including world-class size, depth and figure eight configuration of the shafts, composite design for earth and hydrostatic pressure requirements and the massive scale of the construction effort,” said Peter Nicol, CH2M Water Business Group President. “We are proud to have been a member of the tremendous team that completed this successful project on behalf of DC Water. This project will play a critical role in the city’s overall goals to clean up its waterways.”

Each of the ENR winning project teams, including DC Water’s Blue Plains Tunnel team, were recognized during a special ceremony on November 1, 2016, in Baltimore, Maryland.

In addition to the ENR awards, the Blue Plains Tunnel was also awarded the International Tunneling Association’s Technical Innovation of the Year Award in 2013 for the design and construction of the massive figure eight shafts at the Blue Plains Treatment Plant.