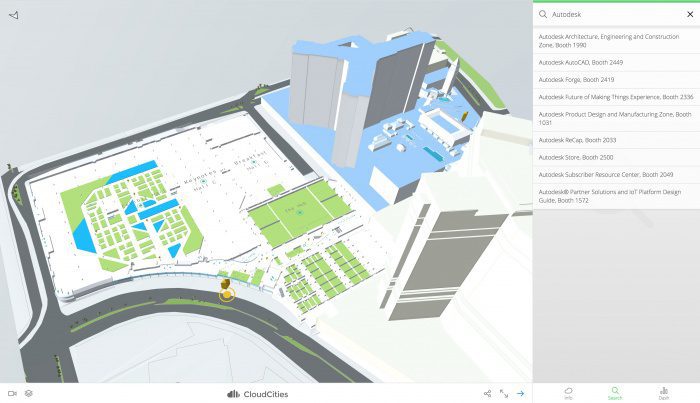 San Francisco/Zurich – CloudCities will provide the interactive 3D conference map for Autodesk University (AU) 2016, which will be displayed on multiple large screens at the venue.

The 3D map hosted on CloudCities gives an overview of the events and exhibits – both outdoors on the Las Vegas strip and indoors within the Venetian hotel. Visitors can use the multiple displays at the venue or on the website to locate classes, keynotes, and exhibitors. AU is the most prominent meetup for designers, engineers, contractors, manufacturers, and digital artists, with more than 10,000 attendees and 700 sessions.

The CloudCities solutions team created the 3D map based on 2D CAD and GIS plans. The 3D data and the event information were integrated using the CloudCities platform.

“The 3D conference map supports our effort to make Autodesk University 2016 more experiential and more visible,” says Teresa Anania, Director, Subscriber Success, Autodesk Inc. The natural interaction with the 3D model creates an engaging experience that invites participants to explore and connect with the event, its exhibits, and attendees.”

“We’re delighted to be selected by the Autodesk Event Technology team to build and host the interactive 3D map for Autodesk University 2016.” said Antje Kunze, CEO of CloudCities. “We’ve created an application for communication and presentation of ideas that are intuitive, immersive and scalable. With the latest release, CloudCities adds support for Autodesk FBX. This exchange format makes it possible for Autodesk AutoCAD, Autodesk Revit, Autodesk AutoCAD Civil 3D, and Autodesk InfraWorks users to bring their 3D models into CloudCities.”

CloudCities will showcase their online 3D platform at booth # 2761 during the conference.

CloudCities is the leading online platform for publishing interactive 3D city models. It runs in any web browser and on any mobile device, no plugins needed. CloudCities enables customers from various industries to publish 3D models and link analytic data. Share your CloudCities scenes on social media, or embed the 3D viewport directly into your own website.

The 3D web startup CloudCities is based in California, USA, and Zurich, Switzerland.