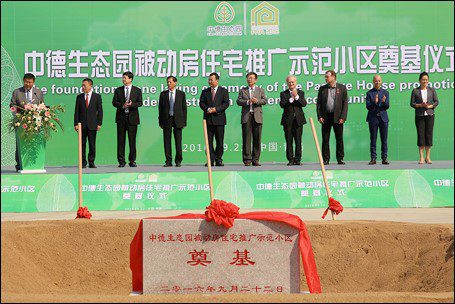 Qingdao – Along with working on the world’s largest passive house settlement in Heidelberg, Wolfgang Frey and his team at Frey Architekten are also involved in Asia’s largest passive house settlement. In September 2016 a groundbreaking ceremony for the nearly 200-acre construction site took place in Qingdao, People’s Republic of China. Wolfgang Frey participated together with other distinguished guests and decision-makers.

The German architect and urban developer Wolfgang Frey has been active in China since 2010 and acts as consultant to the Ministry for Construction in the People’s Republic of China, providing his expertise in sustainable architecture. Wolfgang Frey works directly with Qiu Baoxing, former Vice Minister for Construction and current consultant for the State Councilor Li Kegiang, the Minister President of the People’s Republic of China. Wolfgang Frey’s concepts for a socially sustainable and environmentally friendly future were reflected in a speech given by Xi Jinping that the Chinese President gave at the World Climate Conference in Paris in 2015.

Numerous projects have been developed in China including a retail center in Taiyuan with about 216,535 square feet, a logistics center with about 3.05 million square feet and a residential district concept in Shanxi Jinzhong with about 328,000 square feet in size. The team at Frey Architekten has also focused on reconstructing the South Chinese city of Kunshan to reduce smog and develop the one-mile long waterfront in cooperation with “EC-Link” in Foshan in the province of Guangdong. Now Wolfgang Frey and Frey Architekten, together with their Chinese and German partners, are working on developing Asia’s largest passive house settlement located in the Sino-German Ecopark in Qingdao.

Before the opening of the first “Asian Passive House Conference,” the celebratory groundbreaking ceremony for the passive house pilot project in the Sino-German Ecopark was held on September 22, 2016. It marked the beginning of construction for the residential area according to German passive house standards – for the first time ever in Asia at this scale. Wolfgang Feist, founder and director of the German Passive House Institute (PHI) in Darmstadt was among the distinguished guests and speakers.

The construction area encompasses nearly 200 acres (8.6 million square feet). Similar to Frey Architekten’s award-winning holistic living concept at Heidelberg Village, the passive house pilot project in the Sino-German Ecopark will provide various types of housing to accommodate a wide range of residents, including the disabled and the elderly. The residential area will reduce CO2 emissions by 2.376 tons and will save 7 million RMB in operational costs and 12.72 million kilowatt hours of electricity.

Upon the project’s completion, the houses will be certified by the German Passive House Institute. From the very beginning, this construction project will be seen as a flagship pilot project for future construction efforts in China.