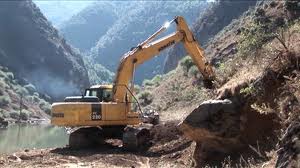 In what is being billed as the largest “mountain-moving project” in Chinese history, one of China’s biggest construction firms will spend £2.2bn to flatten 700 mountains levelling the area Lanzhou, allowing developers to build a new metropolis on the outskirts of the north-western city.

The first stage of the mountain-flattening initiative, which was reported on Tuesday by the China Economic Weekly magazine, began in late October and will eventually enable a new urban district almost 10 square miles in size northeast of downtown Lanzhou – a small, but important part of the Lanzhou Nnew area project to be built.

Read more via The Guardian