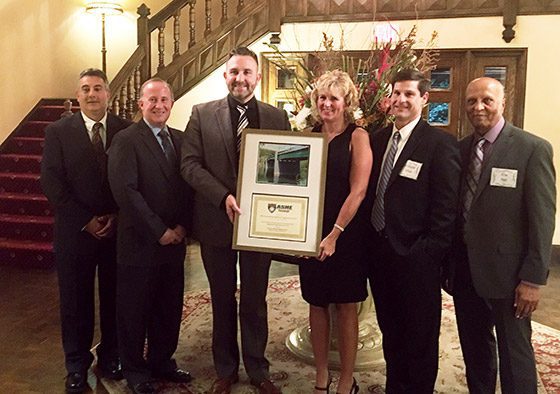 Parul Dubey on October 24, 2016 - in Awards
Pittsburgh, Pa.- The Engineering News-Record (ENR) MidAtlantic Region has named the Hulton Bridge Replacement an ENR Best Projects 2016 winner. The project earned an Award of Merit in the Highways/Bridges category. The replacement bridge also was honored by the American Society of Highway Engineers (ASHE) Pittsburgh Section, receiving the ASHE 2016 Outstanding Highway Engineering Award for a project greater than $15 million. Gannett Fleming served as the prime consultant on the project.

Gannett Fleming’s design of the 1,633-foot-long multi-span, steel, haunched girder bridge is efficient and elegant. The new Hulton Bridge, located in PennDOT District 11, improves safety and has become an icon to the community with its architecturally unique form and detailing. The public was actively involved in guiding aesthetic concepts that best complemented the local neighborhoods. One of the features of the replacement bridge includes a new five-foot sidewalk with pedestrian overlooks at each pier, allowing for scenic views of the Allegheny River and the City of Pittsburgh in the distance.

The bridge is a source of pride for the community, and shortly after its completion, it was shown to the world. The United States Golf Association’s U.S. Open Championship took place in June 2016 at the Oakmont Country Club, just three miles from the bridge. The event brought crowds of nearly 300,000 to the area, providing the replacement team a challenge to complete the high-profile project ahead of the tournament. The final design of the replacement was accelerated for a 2013 completion, allowing time for construction to finish before the 2016 U.S. Open. As a result, the new Hulton Bridge improved traveler mobility and safety for attendees during this event.

The new Hulton Bridge is highly decorated, receiving the Eugene C. Figg Jr. Medal for Signature Bridges and the Civil Engineering Achievement Award from the American Society of Civil Engineers Pittsburgh Section. The project also was recognized as Outstanding New Major Bridge by the Association for Bridge Design and Construction Pittsburgh Chapter, as well as Transportation Project of the Year as part of the March of Dimes Transportation, Building, and Construction Awards.

For the ENR Best Projects awards, a panel of industry judges, including architects, engineers, and contractors, reviewed 65 projects located throughout Delaware, Maryland, Pennsylvania, Virginia, West Virginia, and the District of Columbia. Submissions were evaluated on the ability of the project team to overcome challenges, contribution to the industry and community, safety and construction, and design quality. An awards presentation is scheduled for Nov. 1 in Baltimore, Maryland.

Projects submitted for the ASHE Outstanding Highway Engineering Awards were evaluated on originality and innovation, technical value to the engineering profession, social and economic considerations, complexity, meeting and exceeding the owner’s and client’s needs, and safety. The awards were presented at the Past Presidents’ Banquet on Oct. 8 at St. Clair Country Club in Pittsburgh, Pennsylvania.

Gannett Fleming brought extensive bridge design experience to the Hulton Bridge Replacement project. The firm has worked on a number of other notable bridge assignments, including the South Street Bridge Reconstruction in Philadelphia, Pennsylvania; the Thaddeus Stevens Bridge in Lancaster, Pennsylvania; and the American Parkway Design-Build project in Allentown, Pennsylvania. Gannett Fleming also provided expertise for the Phoenix Sky Train in Phoenix, Arizona, and the George Street Bridge in New Brunswick, New Jersey.