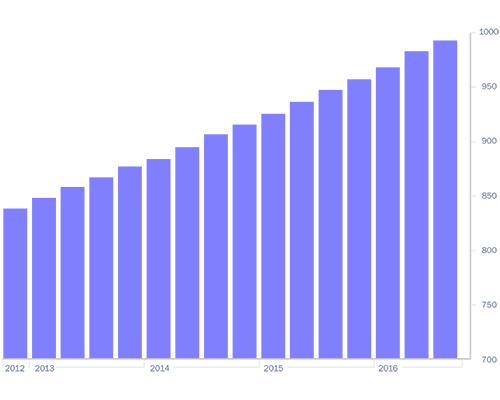 Construction activity experienced modest gains across the United States in the Third Quarter of 2016, with more significant increases in the Northwest and Southwest regions. Additionally, fuel pricing, always a factor in construction costs, continued to follow its seasonal adjustments, though still remain low.

“We are seeing subcontractors and vendors seeking to combat the ongoing shortage of skilled labor by being more strategic and selective in heated markets” said Attilio Rivetti, the Turner vice president responsible for the cost index. “And, while raw material prices increased slightly overall, they still remained relatively low as compared to past years.”

Turner has prepared the construction cost forecast for more than 80 years. Used widely by the construction industry and Federal and State governments, the building costs and price trends tracked by the Turner Building Cost Index may or may not reflect regional conditions in any given quarter. The Cost Index is determined by several factors considered on a nationwide basis, including labor rates and productivity, material prices and the competitive condition of the marketplace. This index does not necessarily conform to other published indices because others do not generally take all of these factors into account.