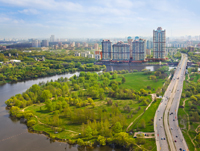 C40 Cities Climate Leadership Group (C40) today announced the expansion of membership to include four additional cities from around the world – Oslo, Vancouver, Venice, and Washington, DC – bringing the total number of current C40 members to 63.

“Cities are leading by example when it comes to climate change, and these local actions are having a global impact,” said C40 Chair, New York City Mayor Michael R. Bloomberg. “The four new members that are joining us today have demonstrated their commitment to addressing climate change, and we are excited to welcome them into our global network.  Together, we will continue making a real difference in the future of our world.”

Oslo, Norway (Europe)
The City of Oslo is recognized as one of Europe’s greenest capitals, proud of its innovative solutions to reduce its greenhouse gas emissions. Direct GHG emissions in the city are already low at 2.3 tons of CO2 per capita, but the Oslo City Council has set up targets to halve GHG emissions from 1990 levels by 2030, and to be carbon neutral by 2050. To this end, an integrated set of policies focus on energy efficiency and the use of local energy resources; CO2-free heating; and a long-term transition towards CO2 free transport.

“We respond to climate change by making a global commitment and by taking local action. Our vision is to move Oslo from a low carbon city to one that has zero emissions, and we are committed to achieving a long term and continuous transformation towards this goal. Cities will play a crucial role in achieving substantial greenhouse gas reductions. It is important for Oslo to take part in the C40 network to exchange experiences and learn from other cities that show leadership and are willing to stand up against global warming. We wish to contribute actively to the network with our knowledge and experience,” says Governing Mayor, Stian Berger Rosland.

Vancouver, Canada (North America)
The City of Vancouver has set the bold goal to be the greenest city in the world by 2020, and currently has the lowest per capita greenhouse gas emissions in North America. Recent initiatives include approving a neighbourhood energy strategy that will see the conversion of an existing steam heat system to low carbon energy sources; launching city-wide food scraps recycling for 100,000 single family and duplex homes, which will reduce 3,000 tonnes of carbon pollution per year; and the unanimous adoption by City Council of a Climate Adaptation Plan.

“We’re very excited that Vancouver is one of the newest cities to join the C40 Cities Climate Leadership Group,” said Vancouver Mayor Gregor Robertson. “While other levels of government stall or delay, cities like Vancouver are taking action on climate change and showing that we can reduce our carbon pollution while growing our economies. We’re looking forward to sharing our knowledge while learning the lessons from other cities.”

Venice, Italy (Europe)
Venice is an incubator for sustainable policies that lead to the reduction of greenhouse gas emissions, including an effort to expand urban green space to achieve a ratio of 75 square meters per inhabitant (the largest effort in Italy); and an integrated project on sustainable mobility that builds upon the city’s already low motorization rates, broad pedestrian areas, and high number of passengers in public transportation. Venice also has implemented their Action Plan for Sustainable Energy that goes beyond the objectives set by the Covenant of Mayors. As it relates to adaptation to climate change Venice has been declared a “UN Champion” for cultural heritage protection in the UN office for disaster risk reduction (UNISDR) campaign “Making My City Resilient.”

“Venice is not only a living testimony to man’s greatness in culture and art – to which the whole world looks with admiration and respect – but also a hub of modernity which enables it to look confidently at a future of continuing environmental social and economic vibrancy,” said Mayor Giorgio Orsoni.

“The District is proud to join this network of global cities taking real action to combat the impacts of climate change,” said Mayor Vincent C. Gray. “The efforts of our local government and partners in the private sector are already bearing fruit. We have substantially reduced greenhouse gas emissions while growing our economy and population.  The District is proving that we can build a thriving city and economy while reducing our environmental footprint.”

Chairman Bloomberg noted that Vancouver joins as an Innovator City; Washington, DC as a Megacity; and Oslo and Venice join with Observer status until all year-one participation standards are met.  For more information on membership guidelines please go to www.C40.org.

About C40:
The C40 Cities Climate Leadership Group (C40) is a global network of the world’s largest cities committed to implementing meaningful and sustainable climate‐related actions locally that will help address climate change globally. C40 was established in 2005 and expanded via a partnership in 2006 with President William J. Clinton’s Climate Initiative (CCI).  The current chair of the C40 is New York City Mayor Michael R. Bloomberg.  To learn more about the work of C40 and our Cities, please visit www.C40.org and follow us on Twitter @C40Cities.