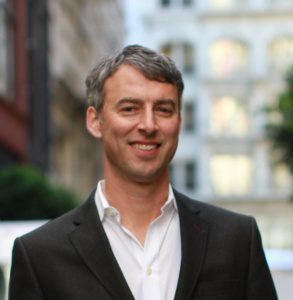 Bry Sarté currently serves on the faculty of Columbia University’s Architecture and Urban Design Program, where he lectures on infrastructure, resiliency and public space. He has served as an engineer for planning projects with the world’s top architects and founded his own sustainable infrastructure design firm, Sherwood Design Engineers, as well as the nonprofit Sherwood Institute, which is comprised of academic, professional and government advisors from five countries directing research and innovation to help solve critical water and energy issues.

I2: Can you describe Columbia University’s Architecture and Urban Design Program and what you do there?

Sarté: I’ve been teaching for several years in graduate school architecture, planning and preservation at Columbia University. I have been co-teaching a course with Morana Stipisic in urban design in the Urban Design Program. The course is “Resilience Infrastructure in Public Space,” and this publication is part of an urban innovations series curated by Kate Orff, the director of the program and the urban innovations series.

Ours is the first in a series that’s water-innovation focused, and it’s built in part on the framework of our course as well as input from my practice, Sherwood Design Engineers, which is a sustainable infrastructure design firm.

We’ve brought those elements to this theoretical academic investigation into how to shape cities of the future differently with respect to the increasing risk around the different aspects of water, thinking specifically about solutions to address those.

Sarté: Sherwood Design Engineers is headquartered in San Francisco. We’ve also been in New York for 10 years, and we have offices in Houston, New Orleans, Atlanta. Sherwood Institute is a sister non-profit based in San Francisco that’s involved in research and policy, and has been helping to facilitate engagement with the United Nations related to this publication.

I2: Elaborate on some of the work the Institute does that’s different from your work at Columbia and Sherwood Design Engineers?

Sarté: Think about it this way: Engineering projects have a beginning, middle and end, usually, and usually have a defined boundary. It doesn’t mean the challenge or problem we might be trying to address, be it sea-level rise from climate change, or flooding impacts that affect a watershed that doesn’t just stop at a city boundary, can’t be addressed by an individual project. The Institute is a mission-based firm trying to make a positive impact. To do that, the Institute will come in and pick up where a project leaves off to provide longer, more-lasting benefit.

I2: How would you define ecological engineering?

Sarté: I think about it in a couple different ways. I think about it in terms of how we bring the science from nature and ecological processes to solve technical engineering problems. For example, using the cleansing power of natural processes to break down pollutants in a water stream or a stormwater flow. That’s an important part of our practice, and, furthermore, to allow for natural systems to be woven into urban systems in a way that’s naturally adding beauty and improving public space, and providing measurable benefits.

I2: How does ecological engineering impact the process, from design through to construction and maintenance?

Sarté: Very rarely would anyone hire us based on how we would engineer or an engineering process. They’re looking for a result: complying with a regulatory requirement, addressing some kind of risk or problem. The environmental or ecological engineering are things that we bring as part of our design process and our toolkit, where we look at the opportunity to create multiple benefits from a system.

For example, we have a project in Houston. This is a major piece of Houston’s public space, Memorial Park. A very large percentage of this park, which is their largest central park in the city, is subject to major challenges. Flooding as well as periods of extended drought have killed huge parts of their forest. Thinking about ecological processes to slow water down to reduce flooding, rather than piped solutions, has been an important part of our process.

We looked at some ways we could substitute pipes with bioswale and rain gardens and natural systems that could clean and treat the water. To that end, we were able to demonstrate a significant financial benefit on a linear foot replacement of pipe systems with natural, engineered systems.

I2: Can we turn a little bit to your upcoming book, Innovations in Water Infrastructure?

I2: Could you describe what some of those key innovations are, and how they’re making an impact on engineering and design?

Sarté: First of all, they’re grouped into four categories: technology, ecology, finance and equity. These four categories of innovations are meant to allow laborers and engineers and planners and designers and a variety of contacts globally to bring different tools from each or any or all of those four buckets to address some of the critical risks that face us. I think one of the things we’ve done and spelled out in a very specific way in this book is aligning seven major risks that we see, ranging from contaminated water from sanitation and sea-level rise, to flooding and so on, to generate these responses that organize the innovations in a number of different ways.

One of our innovations is looking at ways to create what we call micro-infrastructure centers that give a neighborhood or a number of blocks the ability to operate independently or complementary to the larger infrastructural systems. Thinking about, or matching effectively, a smaller community that’s struggling to keep up with changing temperatures that are compromising their water supply. That might introduce a small district sales system that’s treating wastewater, re-utilizing it for all their non-potable demands.

Another innovation is this idea of bolt-on technologies, where innovations such as the turbines placed in gravity-feed pipes that bring drinking water from Mount Hood watershed to Portland are actually generating power and electricity from the pressure flow in those pipes without compromising the system.

Or systems such as the algae treatment that processes wastewater to produce energy as a bolt-on to traditional wastewater treatment plants being piloted by Mobile Bay in Alabama.

I2: In the headlines, you hear a lot about the aging infrastructure in the United States, and flooding is repeatedly surfacing with very serious consequences. Could you describe some of the innovations that might help in those particular areas?

Sarté: Aging infrastructure is risk number five in this book. Risk number three is riverine floods. Some of the tools, especially around the innovations that we point to in our ecological tool basket, start to look at how to dedicate adequate amounts of open space that can be embedded or built into an urban fabric to provide that level of buffer and treatment. We provide examples like very dense places, like the University of California at Berkeley, where a stream and its contributing network was primarily paved over, and we found selective areas to essentially daylight tributaries into the main channel there that provide additional capacity or storage volume.

Looking at the next scale up, thinking about opportunities where there is actual larger floodable open space. A good example we point to is the Brooklyn Bridge Park, which is along the Dumbo waterfront in New York City that’s protecting billions of dollars of real estate, essentially. It didn’t do that during Sandy, and we’ve been working on building a soft edge that can serve as a shock absorber as well as elevated portions of the park that are high enough to stop the flood waters from coming into Dumbo.

Brooklyn Bridge Park, like other examples that we provide, have the ability to benefit from support from the development they’re serving as well as the larger city-wide investments that benefit from this kind of flood protection.

Thinking about aging infrastructure, this book has a 20-year view to it, in terms of an investment horizon. In particular, it’s aligned with the United Nations’ Habitat III process that this publication has been developed in parallel with. Part of it is thinking about what are the key investment levers that would allow an opportunity or have demonstrated a necessity for innovative investments in this sector.

I think there are some interesting models in terms of finance, such as decentralized infrastructure and creating districts or sub-districts within a larger sewershed or looking at a larger infrastructure-serving system that can be capitalized by and supported by neighborhood-scale infrastructure.

For example, San Francisco has set up a program to subsidize district-scale water-reuse systems that serve multiple properties, because they have struggled to get the funding to build city-scale recycled water distributions. It’s in the city’s best interest to help support that water-demand reduction by collaborating with more localized, district infrastructure providers.

Some of the think tanks that we facilitated generated some really interesting recommendations that might require specific legal or other barriers to be addressed, but that’s certainly going to need to be thought about in the coming decades. How do we pay for this infrastructure that’s failing?

I2: If you were to give infrastructure students, designers, or engineers one key tip or takeaway from your experience, what might that be?

Sarté: Engineering and the evolution of how we provide engineering services has really moved to a global conversation, like many things. Some of the best ideas for thinking about our next century of urban development, some of the best learning is coming from overseas, where rapid urbanization has occurred.

In the face of new and emerging risks, China has been experimenting rapidly with a lot of new concepts and development approaches that provide lessons.

Other areas that just haven’t had the resources that the United States had in the 1950s, 60s, 70s, to build the kind of infrastructure that we’ve inherited, have built more nimble systems and actually might start to provide lessons for us as we move into a future with scarcer resources, to advance our infrastructure.

I think the fact that the United States continually receives an incredibly low score in terms of our infrastructure is absolutely a result of a lack of funding finance, and thinking about more creative and nimble ways to operate within a scarcer environment.

The flip side of that, and an important part of our book as well, is what are some of the things in the opposite direction that are effective frameworks for other countries to think about? Examples like the Chesapeake Bay watershed, where multiple states and [Washington, D.C.] are collaborating and protecting a very large and important natural resource, and where that collaborative structure and scale actually could provide a way forward for other countries and other initiatives abroad.

I2: Keep an open mind and not just look at the things that you’ve seen locally; to consider as many options as possible?