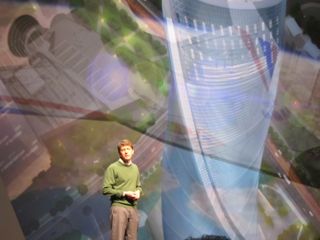 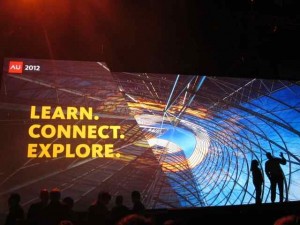 Autodesk University 2012 took place in Las Vegas last week, with more than 8,000 Autodesk customers gathering from more than 80 countries. The event also included a live Internet broadcast to customers that were unable to attend. This year’s theme of “Learn. Connect. Explore.” encouraged attendees to make the most of the gathering, and to get inspired and energized by what the future of design will hold.

Autodesk has recently re-aligned their business units with a new Engineering, Natural Resources, and Infrastructure (ENI) grouping that encompasses roadways and bridges as a distinction from their Architecture, Engineering, and Construction (AEC) group that is now focused on just buildings. The groupings are no longer about technology, but about application, as tools cross both ways through these industries and software suites include similar components whether aimed at buildings or broader infrastructure. With the new alignment, expect to see some more integrated solutions similar to the recent Autodesk Utility Design.

Autodesk, as a global company, are at play across many disciplines and are increasingly making their products more accessible to more users. In the past few years, the company has seen their consumer audience grow exponentially with a push into free apps that include 123D coupled with the social networking site Instructables, as well as the apps Sketchbook, Pixlr, and SocialCam.

Mary Hope McQuiston, director of marketing and business development for the Consumer Group spoke to the consumerization of IT, where consumers are adopting technology first and then driving business, instead of the previous pattern of business driving technology adoption at home.

Over the 30 years that Autodesk has been in business, they have amassed 12 million professional users. In contrast, in just over three years there are more than 100 million consumer users engaged in design and creativity pursuits. With this broad base of new users, Autodesk has become a more recognized brand with case studies and examples that are covered broadly by mass media. The consumer buzz, and their strong alignment with the “Maker Movement,” has done a great service for the company and its users by providing buzz-worthy attention and an improved cool quotient.

All-in on the Cloud

Autodesk’s CEO Carl Bass asserted that combining the power of the cloud, with the devices in your hands, is the biggest thing to happen to computing since the personal computer. Autodesk offers a full set of professional cloud-enabled tools that span the entire design process. The cloud complements the way that you get your work done, to maximize your creativity, your knowledge and your skills. Autodesk showcased a new complement of 360 online services that combine modeling with the power of online computing resources, including:

Bass answered questions with the press, and declared that the cloud is the future because it provides agility in solving business problems. No longer do we have to talk about a huge enterprise solution involving hardware investment and an army of people, instead we can start right away and scale over time. With these online workspaces, Autodesk is making design collaborative and more social with tools for chat and messaging alongside project process tools. The sites make the design space available on mobile devices and web browsers, and streamline design creation, as well as the review and approval process. 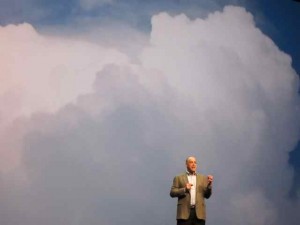 Autodesk’s CEO Carl Bass speaks to the empowering nature of the cloud.

With the heightened focus on failed infrastructure, due to impacts of Hurricane Sandy, some time was spent to point out that we can build things faster, smarter and cheaper these days in order to fill these infrastructure gaps.

When asked if we should be lobbying and creating more of an awareness in Washington about the improvements that are possible, Carl Bass discussed that not only is there a growing need to spend money to improve infrastructure, but in this environment of constrained budgets, we need to get the most for the money that we spend. Jeff Kowalski, CTO of Autodesk, mentioned that countries outside of the United States are adopting new practices more quickly, and seeing great returns in terms of the speed and cost of construction.

A speaker in one of the Innovation Forums even went to the step of comparing the cost and timelines of the Empire State Building with that of the Freedom Tower at Ground Zero. The Empire State Building went up in 1 year and 45 days in 1931, and now we’ve seen greater than ten years, and more dollars in comparison, to replace the tallest building in Manhattan. If we aren’t able to do better in the United States, then we aren’t competing on a global scale where these projects are much quicker and more efficient.

Autodesk aims to bring simulation functionality to every engineer’s desktop, primarily through access to computing that is almost infinite in capacity and virtually free. This functionality allows for hands-on tinkering with the model to make sure it performs for the purpose that you’re designing it for, including analysis of energy efficiency and structural integrity.

For the second year in a row, there was a large hands-on area where attendees could access laser cutters from Epilogue, CNC machines from ShopBot and 3D printers from MakerBot. Carl Bass mentioned that he wants design software to be as flexible and fluid with digital workflows as you can be in a workshop. When you’re working on a piece you can use whatever tool that fits. We tend to be tool-centric with our digital processes, once we learn a digital tool, we tend to do everything we can with it, and he says that’s a mistake. Instead, he wants to free us to use the right tool for purpose, which means much more portability with our models. 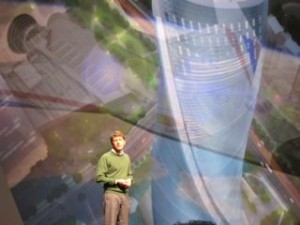 For the second year in a row, Vector1 Media moderated a debate regarding BIM or GIS as a means to move forward. The audience expressed a fair amount of frustration regarding conflicting approaches and software limitations. There was a great deal of spirited discussion about the best approach, the point of truth, and the need for a broader model of models.

Many of the technical challenges between BIM and GIS have been addressed, but there continue to be gaps in workflows and entrenched approaches that will need to be surmounted to get to the next level of modeling and analysis.

Overall, Autodesk University provided a succinct road map on where Autodesk is taking their technology. There’s a bit of swagger that has come from their consumer success, in light of such a rough construction and development market worldwide that feeds much of their bottom line. The way forward includes more cloud applications, streamlined workflows, and tools that deliver on ease of use lessons that they’ve learned from their consumer applications.