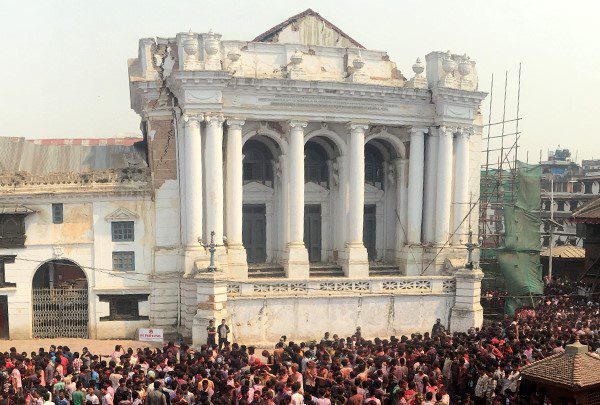 Parul Dubey on October 5, 2016 - in Buildings
KATHMANDU – A 100-year-old palace and one of the most Nepal’s iconic heritage buildings, which was heavily damaged by a M-7.8 earthquake that destroyed scores of history and killed hundreds at a UNESCO World Heritage site here in 2015, is set to be repaired and structurally strengthened, the U.S. Ambassadors Fund for Cultural Preservation announced Friday.

The structural and architectural repairs and strengthening will be done by the technical nonprofit engineering expert Miyamoto Global Disaster Relief in partnership with the International Council on Monuments and Sites, Nepal (ICOMOS) and in close coordination with the Government of Nepal’s Department of Archaeology.

The Gaddi Baithak is a neoclassical building from which Nepal’s kings once ruled and settled the affairs of the country – hence its name, which means Royal Seat. It also was the place where important foreign guests like ambassadors were welcomed by the king.

“Miyamoto Relief is honored to be restoring this iconic building when so many others were lost,” said Miyamoto Relief Executive Director Sabine Kast. “It’s a reminder to the world that it is feasible to restore and strengthen heritage buildings in order to protect and preserve important cultural treasures.”

Dozens of other unique architectural treasures in the Kathmandu Valley were turned to rubble. A pillar supporting part of the structure’s façade collapsed and the earthquake cracked columns and beams. While damage is extensive, Miyamoto engineers say the Gaddi Baithak is repairable and can be made even stronger before another earthquake hits. Locally trained workers will repair and structurally strengthen the Gaddi Baithak using a combination of national and international earthquake engineering techniques that avoid compromising the building’s historic architecture.

Since its creation by Congress, the Ambassadors Fund has provided financial support to more than 640 cultural preservation projects in more than 100 countries. More than $26 million has been dedicated to the preservation of cultural heritage worldwide.

“The United States is committed to protecting the unique and irreplaceable cultural heritage in Nepal, and the Gaddi Baithak restoration project aims to restore this important structure to its original grandeur,” said U.S. Assistant Secretary of State for Educational and Cultural Affairs Evan Ryan at Friday’s ceremony at which the $700,000 grant and largest AFCP project awarded this year was announced.

This year’s recipient Miyamoto Relief is a nonprofit that applies expert engineering expertise to sustain life in at-risk communities worldwide. Its focus to date is at-risk schools in earthquake-vulnerable communities and heritage buildings.