/ Energy / Greener and More Efficient District Energy in the US

Greener and More Efficient District Energy in the US 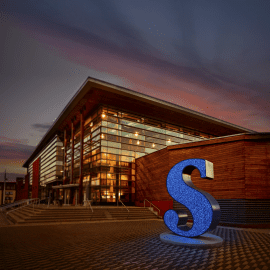 District energy in the US relies primarily on steam heating, which can be costly to operate and maintain, as well as being a potential safety hazard. But more and more operators are looking to the alternative: hot water district energy. The system which is widely used in Europe is more flexible, has a reduced risk of leakages, a higher degree of efficiency, and better possibilities of integrating renewable energy.

Ramboll now helps five US and one Canadian client in introducing hot water district energy and will be presenting the advantages of the system at the New York Climate Week that takes place during the annual UN General Assembly.

“The old steam systems need to be modernized to meet the low carbon challenge”, says Søren Holm Johansen, Group Executive Director for Markets and Global Practices at Ramboll. He will participate in two Climate Week events at the New York Academy of Science on  Tuesday 20 September 2016

MIT as a new customer

As leading engineer, Ramboll is already conducting a renewable energy study for the Ivy League University Dartmouth to help the old New Hampshire institution reach its sustainability goals: this part of the green transition means CO2 reductions of up to 80%.

Ramboll is also carrying out the engineering design and pre-construction phases of an upgraded heating and cooling network for Sheridan College in Ontario, Canada (pictured) – and participates in district energy projects in the urban areas of St Pauls in Minnesota and Bridgeport in Connecticut.

Now Ramboll has won two new important contracts; at MIT (Massachusetts Institute of Technology) and the city of Cambridge.

At MIT, Ramboll is initially hired to design a hot water system for the Western part of the campus – together with our partner Vanderweil Engineers. In Cambridge, the task is to conduct a district energy and sustainability masterplan for the whole city.

“These are two very important contracts that help us gain a strong foothold on the American energy market”, says Jens Ole Hansen, Global Market Director for Energy in Ramboll.

In Europe, there is typically public ownership of roads and other city areas – which makes it easier to roll out district energy than in the US, where the private ownership can be a barrier. Therefore, Ramboll’s strategy has been to focus first on colleges, because the ownership here is more centralised. The second step is to approach progressive cities – and that is the strategy that now has succeeded in Cambridge.

“We are now so confident about the potentials in this area that we will be opening a new office in Boston, dedicated to energy services, before the end of 2016”, Jens Ole Hansen says.