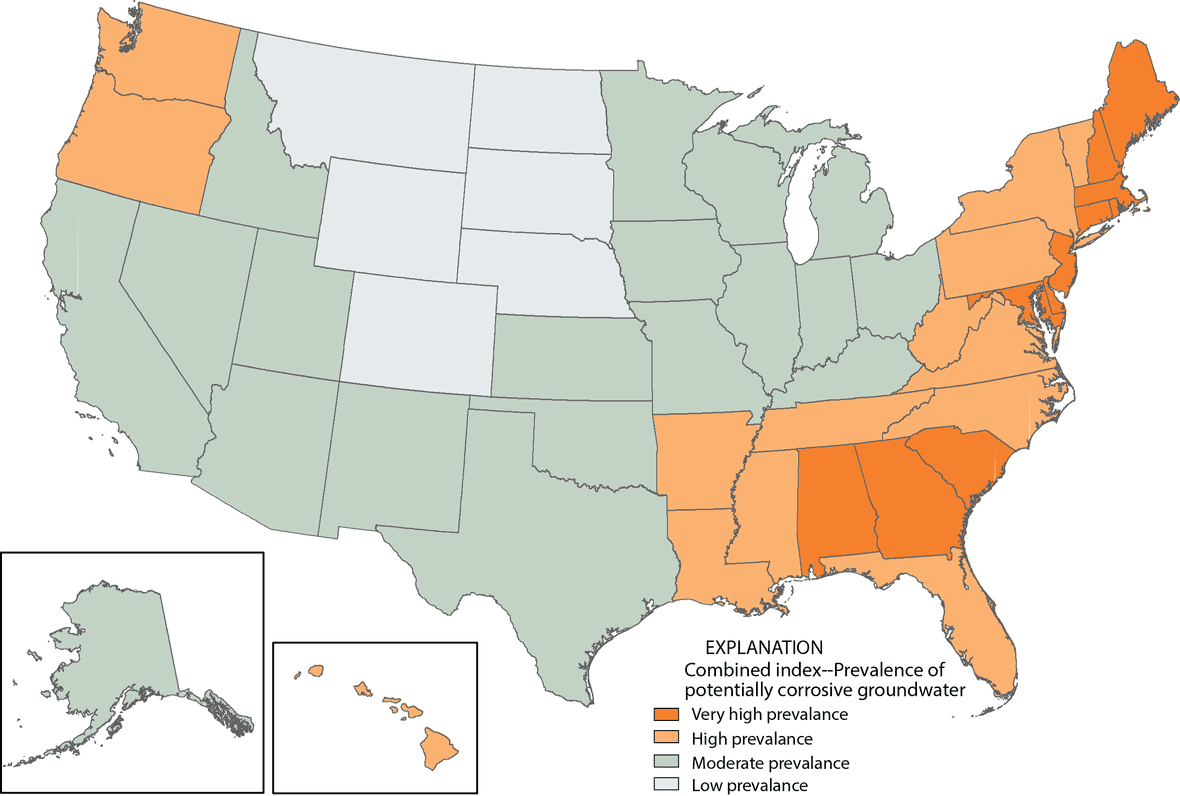 Study Shows High Potential for Corrosive Groundwater in Half of U.S. States

Corrosive water is top-of-mind for many water utilities given the trouble in Flint, Mich., which stemmed from treated surface water from the Flint River. A new report, however, assesses 20,000 wells nationwide, showing that groundwater in 25 states has a high prevalence of being potentially corrosive.

Two indicators of potential corrosivity were combined to determine that corrosive groundwater occurs in all 50 states and the District of Columbia. Corrosive groundwater, if untreated, can dissolve lead and other metals from pipes and plumbing fixtures.

“The corrosivity of untreated groundwater is only one of several factors that may affect the quality of household drinking water at the tap,” said Stephen Moulton II, chief, USGS National Water-Quality Assessment Program. “Nevertheless, it is an essential factor that should be carefully considered in testing for water quality in both public and private supplies nationwide.”

The USGS report, Assessing the Potential Corrosivity of U.S. Groundwater, can be found at bit.ly/29Ex4tx. Groundwater in 25 states has a high prevalence of being potentially corrosive.

Years of chronic underinvestment in critical areas such as transportation, water treatment and power grids are catching up with countries worldwide. Globally, some $2.5 trillion a year are invested on transportation, power, water and telecommunications systems, but it’s not enough—and needs are only growing.

In a follow-up to its comprehensive 2013 report, “Infrastructure productivity: How to save $1 trillion a year,” the McKinsey Global Institute finds that the world needs to invest an average of $3.3 trillion annually just to support currently expected rates of growth. Emerging economies will account for approximately 60 percent of that need.

Despite glaring gaps and years of debate about the importance of shoring up backbone systems, infrastructure investment has actually declined as a share of GDP in 11 of the G20 economies since the global financial crisis. Cutbacks have occurred in the European Union, United States, Russia and Mexico. By contrast, Canada, Turkey and South Africa increased investment.

If the current trajectory of underinvestment continues, the world will fall short by roughly 11 percent, or $350 billion per year. The size of the gap triples if the additional investment required to meet the new UN Sustainable Development Goals is included.

Read the original report at bit.ly/29O6aAq.

The recent “Brexit” vote in the United Kingdom has come with a dramatic decrease in construction purchases. The new Purchasing Managers’ Index figures for the UK released by Markit and the Chartered Institute of Procurement and Supply show a contraction in June 2016 that puts the index at the lowest level since 2009.

The index figure rests at 46 as of early July 2016. A reading above 50 indicates expansion in the construction industry, while a reading below indicates contraction.

“Construction firms are at the sharp end of domestic economic uncertainty and jolts to investor sentiment, so trading conditions were always going to be challenging in the run-up to the EU referendum,” said Tim Moore, senior economist at Markit. “However, the extent and speed of the downturn in the face of political and economic uncertainty is a clear warning flag for the wider post-Brexit economic outlook.”

The British government is responding to this uncertainty by reaffirming its own commitment to invest in roads and railways as well as the Northern Powerhouse initiative. Pledges for continued infrastructure investment are seen as vital to boosting the economy. The majority of June survey responses were recorded ahead of the referendum. There is worry that the ensuing political turmoil will hit construction spending decisions for some time to come.

The momentum behind developing smart cities continues unabated. City leaders worldwide are committing to smart-city objectives as they attempt to shape the development of their cities to meet social, economic and environmental challenges. National governments also are encouraging cities to become centers of innovation and drivers of sustainable growth.

City leaders and suppliers are recognizing that there needs to be a clearer and faster route to the broader deployment of proven technologies and solutions. The question is how to establish the proper business models and deployment strategies to enable such expansion.

A Navigant Research report examines the evolution of the global smart-city market, with a focus on five key industries: energy, water, mobility, buildings and government. The study compares different approaches to the smart city and provides comprehensive profiles of noteworthy smart-city projects in each major world region.