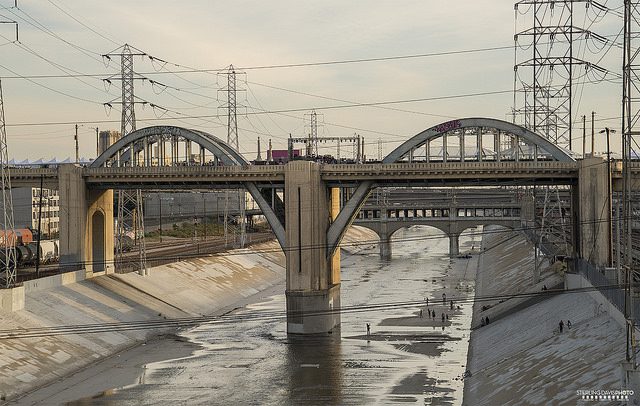 LOS ANGELES  – The 3,500-foot-long Sixth Street Viaduct linking Boyle Heights and Downtown Los Angeles is being replaced because of a chemical condition that is weakening the structure’s concrete. Since February 2016, nearly 2,000 feet of the original viaduct has been torn down, bringing the demolition phase to 50 percent completion.

In the most recent construction milestone, the two pairs of iconic steel viaduct arches that span across the Los Angeles River channel were removed. One of the arches is being preserved and will be incorporated into the 12 acres of planned landscaping below the new viaduct to serve as a focal point.

“We are excited to see the progress being made on this transformative project that will ultimately become L.A.’s newest architectural centerpiece,” said Terence Pao, PE, HNTB project manager. “In making way for the new replacement viaduct, our city continues to pay homage to the original landmark bridge that has played such an important role in the lives of Angelenos, and recognized by millions more around the country.”

Work continues on the massive project with the viaduct demolition scheduled for completion by the end of the year. In the next few months, viaduct foundation work will get underway with the installation of the first footings for the new structure, which will be followed by the construction of the main viaduct.

“Everyone working on this project is committed to delivering a world class viaduct that brings together the best in design, the highest standards in safety and a new level of   mobility and connectivity for residents and visitors,” said Gary Lee Moore, Los Angeles City Engineer.

HNTB has long been recognized as the industry’s leader in planning, design and construction of complex long-span and movable bridges, and the firm’s bridge designers are sought-after speakers at industry conferences.

As a leading infrastructure solutions firm in the U.S., HNTB traces its roots to the West back to work on Pasadena’s Arroyo Seco Bridge in 1914, the firm’s first year of operation.

About HNTB
HNTB Corporation is an employee-owned infrastructure firm serving public and private owners and contractors. With more than a century of service in the United States, HNTB understands the life cycle of infrastructure and addresses clients’ most complex technical, financial and operational challenges. Professionals nationwide deliver a full range of infrastructure-related services, including award-winning planning, design, program management and construction management. For more information, visit www.hntb.com.