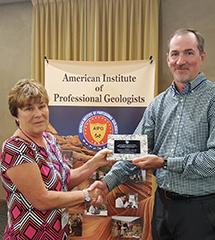 Dan St. Germain, a senior hydrologist in HDR’s Mahwah, New Jersey office, was recently presented with the American Institute of Professional Geologists Presidential Certificate of Merit at the AIPG annual meeting in Santa Fe, New Mexico. St. Germain was recognized for dedicated service that has made an outstanding contribution to the institute. He and a small group of colleagues spent over six months selecting the next executive director of the organization.

Over the past two decades, St. Germain’s involvement in AIPG has grown from the local level to leading the entire organization. Locally, he held various positions including chapter president, and led the chapter to an annual meeting with the greatest attendance and best financial outcome to-date. He was elected to AIPG national leadership, where he served in multiple roles, including a year as president in 2008. Since then he’s served on national committees, and is currently the treasurer of the AIPG Foundation, which provides scholarships to undergraduate geology students.

HDR has partnered with clients to shape communities and push the boundaries of what’s possible since 1917. We specialize in engineering, architecture, environmental and construction services. With nearly 10,000 employees in more than 225 locations around the world, we think global and act local.