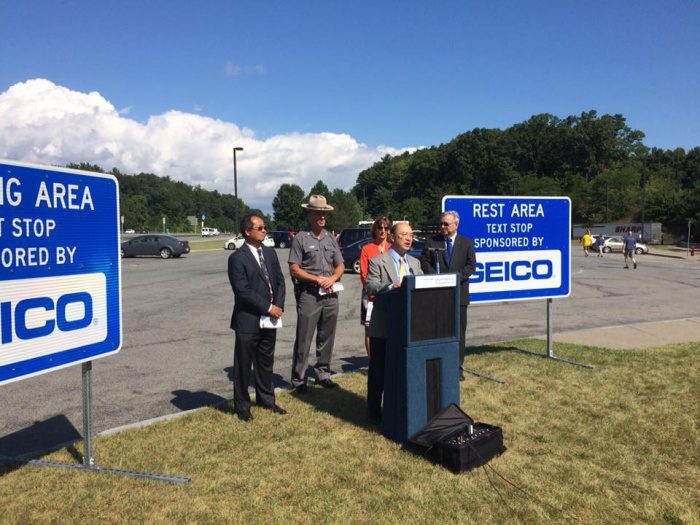 New York State Department of Transportation Commissioner Matthew J. Driscoll today announced that GEICO is sponsoring “Text Stops” along state highways operated by the department, helping to discourage texting while driving and providing nearly $1.3 million in revenue to New York State over the next five years.

“Governor Cuomo initiated the first-ever ‘Texting Zones’ along state highways in 2013, and this innovative partnership with GEICO supports New York’s broad efforts to curb distracted driving and the traffic safety hazards it creates,” Commissioner Driscoll said. “This sponsorship agreement provides one more way to encourage motorists to focus on driving and pull off the road to text or use mobile devices.”

Governor Andrew M. Cuomo announced the new Texting Zones in September 2013, expanding upon the state’s efforts to reduce distracted driving by highlighting places for motorists to pull off the highway, park and use their mobile devices.  Park-and-ride facilities, rest stops, and parking areas along state highways and the New York State Thruway serve a dual function as Texting Zones.

GEICO Vice President of New York Operations Rick Hoagland said, “We all know distracted driving has become an epidemic on our roadways. The number of injuries and fatalities is staggering. GEICO is proud to work with the New York State Department of Transportation to support 52 Text Stops where drivers will have a safe place to use their smartphones.”

GEICO is paying for the fabrication and installation of new signs promoting 52 “Text Stop” locations along NYSDOT highways.  Additionally, posters discouraging texting and driving will be placed at 34 text stop locations.

GEICO provides similar support to three other states to promote stopping at Rest Areas and Welcome Centers rather than driving: Virginia, Arizona and Florida. To learn more, please visit: www.safephonezone.com. To join the conversation on social media use #GEICOTextStop.

New York State combats texting-while-driving on a variety of fronts, including extensive police enforcement, tough penalties and ongoing public education efforts.  Highway signage reminding drivers that there is a nearby location to safely and legally use their phones or other mobile devices supports that work.  It sends a clear message that there is no excuse for drivers to take their hands off the wheel and eyes off the road because texts can wait until the next “Text Stop.”

GTSC Acting Chair and Department of Motor Vehicles Executive Deputy Commissioner Terri Egan said, “The Governor’s Traffic Safety Committee is proud to support DOT and GEICO, a great partner of New York State, in promoting efforts to stop texting while driving and cell phone use when driving. We work year-round to get the message to drivers that it is not only extremely dangerous for you and others with whom you are sharing the road when you use your phone and text while driving, it is also against the law. I urge New Yorkers to use these text stops and remember to put your phone down when driving – it can wait!”

New York State Police Superintendent George P. Beach II said, “This sponsorship will help amplify the message to drivers that their attention should be on the road, and not on their smartphones. The State Police will continue to diligently seek out drivers who endanger others by texting while driving.”