/ Featured / Live, “Take You There” Report from Italy Earthquake Scene

Live, “Take You There” Report from Italy Earthquake Scene 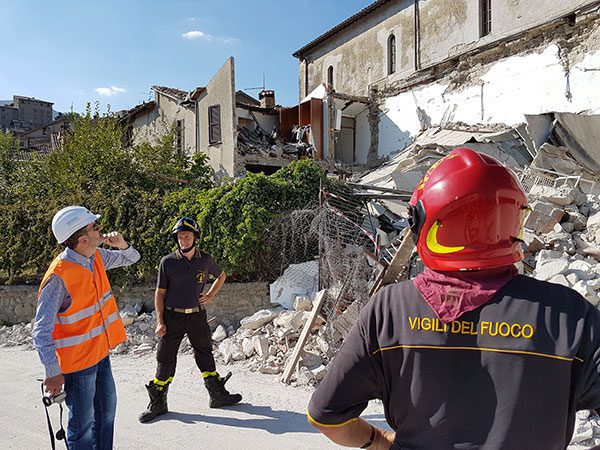 CENTRAL ITALY – Miyamoto International releases the first of its Earthquake Journals reported live from Italy as engineers follow first responders into historic areas devastated by the M-6.2 earthquake that struck Wednesday in this “take your there” account.

After a six-hour drive from Milan, finally we arrive in the earthquake disaster zone, where we’ll meet Alessandro Vittorini, a local engineer from Ascoli Piceno. Alessandro will be our guide to help us find the way to reach many of the remote rural villages that have been flattened by the earthquake, but haven’t gained the attention of the media.

Along the National Road, “Salaria,” coming from Ascoli, there’s a long line of rescue vehicles.

We meet Alessandro in Trisungo, a small village along the road. After fast greetings, we climb up narrow mountain roads for a first view of the disaster zone; at every intersection, there are police and military. We decide the itinerary with Alessandro, aware that the greatest difficulty will be entering the red zones already set up in the most affected villages.

The disaster area is a beautiful mountain region dotted with amazing ancient villages placed on top of the hills, with the high mountains of the Appennines in the background. It’s late summer and a lot of people from nearby cities were spending the last holidays of the summer here when the M-6.2 earthquake struck at 3:36 am.

This is a rural region and most of the buildings are unreinforced masonry, mostly stone with mortar and concrete floors. Very often, concrete roofs have replaced the original wooden ones, but these performed very badly. The ancient and rural architecture makes these villages lovely but fragile, and people resist to leave here for love of history and place. This resistance is rooted in the very thing that makes rural Italy so special.

Since safety is not negotiable, the big challenge will be to make these places safer in a sustainable way.

We’ll visit Illica first, an hamlet of Accumoli, the epicenter of the earthquake. Surveys are allowed only if accompanied by the firefighters, who appreciate our support and discussion in evaluating the dangerous situations.

The stories of people here are everywhere. We hear of four children who were saved coming out from the roof of their house and passing on those of neighboring houses. We meet two German tourists who had their summer house here; the father came from Germany to meet their children who fortunately that night were in Rome.

From Illica we move to Accumoli, a village of 700 people, which is the epicenter of the earthquake. Accumoli is on a hill at a height of 850 meters amid dense forests; a great place to be during the hot summer days.

At first we go to the police station, which is severely damaged by the earthquake.

Several buildings, which should remain operational after a seismic event, were housed in old unreinforced masonry buildings, which have collapsed or are severely damaged and now unserviceable. This happened to several schools, public buildings and even an hospital, everywhere in the disaster zone.

We are surprised that a palace and a tower from the 12th century remain standing without apparent damage, but this is how earthquakes seem to “filter out” their victims…  While we are here, the pharmacist is accompanied by firemen to retrieve some drugs in the fallen pharmacy in the town center that will be used for someone in need.