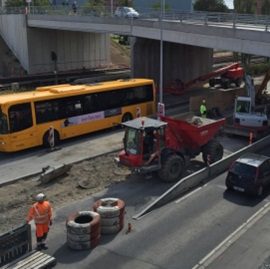 The landscape on the Danish islands of Lolland-Falster is very flat, so the high arcs of the new bridges are even more eye catching than elsewhere.

The reason for the high arcs on the new rail bridges here is to make sure that high wire can be placed underneath. An important part of the whole Fehmarn Link process is to electrify and increase the train speed to 200 km/h on the stretch between Ringsted and Rødby.

It is not yet decided when the tunnel under the Baltic Sea will open, but on Danish ground the work is already in full swing. Among other things Ramboll is advisor for Banedanmark together with Niras on the building of the first 18 bridges and several road stretches. 12 bridges are built, and six more is under construction.

The biggest one by far – a combined road- and railbridge spanning over five tracks in Nykøbing Falster city – was opened Sunday August 14., with the local mayor John Brædder acting as ‘pølsemand’; providing Danish hotdogs and other sausage specialties for the citizens in Nykøbing Falster.

“The challenge for a lot of the bridges here is the short time frame. But we have set up an efficient process with prefabricated elements, so we delivered on time”, explains Mads Jegsen, project manager at Niras.

Finished before the beet season

The Nykøbing Falster city-bridge was torn down and built up in just 12 weeks with the finish taking another four. Now the team is working on another bridge on the outskirts of town, and it has to be ready before the ‘beet season’ – the season where the famous Lolland-Falster beet is transported from the farmers to Nordic Sugar, the largest employer on the islands.

“Next year construction will begin on the stretch between Nykøbing Falster and Ringsted on Sealand – with all major works expected to be completed in 2021”, says Carsten Jakobsen, project manager at Ramboll Denmark.

When the Fehmarn Link is up-and-running the bridges and surrounding areas will have the necessary capacity for up to 72 trains a day, compared to the current six.

Owner’s engineer on the tunnel

Ramboll has an even bigger role in the coast-to-coast part of the Fehmarn project as the owner’s engineer in a consortium with Arup and TEC – meaning primary advisor on the entire project and engineering processes for Femern A/S. Ramboll is the lead partner for the consortium and has been working for Femern A/S since April 2009.

Ramboll has prepared a concept design for the immersed tunnel and for a bored tunnel solution as well as the technical tender documents for all civil works. We are now assisting Femern A/S with the complicated German Plan Approval process. As a part of the advanced activities, Ramboll has already carried out detailed design for pumping stations, demolitions and site roads on Lolland.