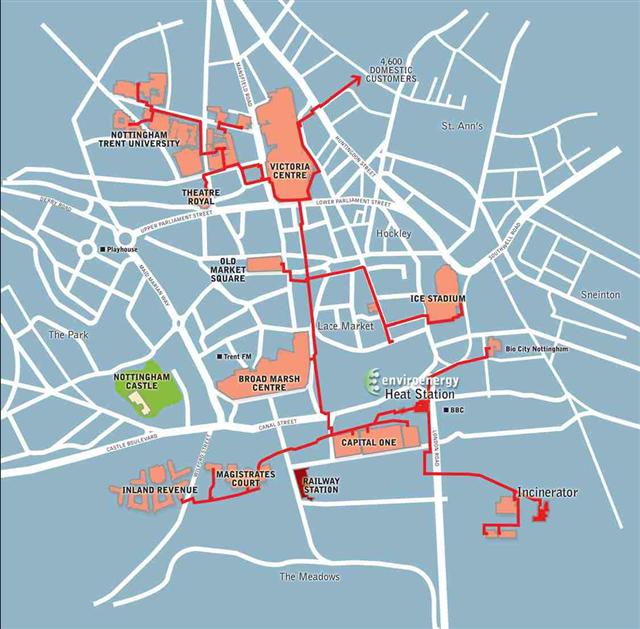 Experts from the University of Sheffield’s Faculty of Engineering believe that the many steel plants located just outside the city centre could be connected to Sheffield’s existing district heating network to provide an extra 20 MW of thermal energy, enough to heat around 2,000 homes.

“It actually costs the steel plants to reduce the temperature of the flue gas and to cool the water used during steel manufacture. Recovering this heat and transferring it to the district heating network reduces the cost of heat production, improves energy efficiency and is beneficial to the environment, making a ‘win, win’ situation for the steelworks and the city,” says Professor Jim Swithenbank, who played a key role in developing the first phase of Sheffield’s district heating system in late 1970s.

Sheffield already has the largest district heating system in the UK, powered through an energy recovery facility that burns the city’s non-recyclable waste. Each year this generates 21 MW of electricity, enough to power 22,000 homes, and 60 MW of thermal energy in the form of super-heated steam, which is pumped around the city in a 44 km network of underground pipes. This provides space heating and hot water to over 140 public buildings and 3,000 homes across the city, reducing the city’s CO2 emissions by 21,000 tonnes a year.

Engineers from the University’s SUWIC Research Centre (Department of Chemical and Biological Engineering) have mapped out a possible expansion of the network which could reduce Sheffield’s annual CO2 emissions by a further 80,000 tonnes.

In the study funded by the UK Engineering and Physical Sciences Research Council (EPSRC), the researchers used digital mapping software (GIS) to identify areas of high energy demand against potential new energy sources, such as the steel works and a new biomass plant currently under construction on the site of a former coal-fired power station.

This enabled them to assess where expansion of the network would be most advantageous. Their findings are published today (May 14) in the Journal of Energy Conversion and Management.

District heating, particularly using waste as a fuel, can provide cost-effective and low-carbon energy to local populations, without exposure to the fluctuations of energy markets.

Such systems are currently rare in the UK, although widely used throughout the rest of the world. Many involve partnerships with local industry, where waste heat from process industries supplies the local district heating network; one such system in Finland uses waste heat from a steel producer.

While some UK cities are now using their waste incineration plants to generate electricity, few connect such facilities to a district heating system to realise the full economic and environmental benefits.

“The analysis we’ve carried out in Sheffield could be mirrored across other UK cities,” says Professor Vida Sharifi, who led the research. “Heating buildings is responsible for half the energy use in the UK. The government have estimated that if district heating were used across the UK in areas with high heat demand, it could supply around 5.5 million properties and contribute a fifth of the UK’s heating needs.

“District heating is a good way to decarbonise the energy supply to meet national and international legislation on emission limits. And, importantly for local people, this form of energy can also be used to provide low-cost heating, especially to those in areas of fuel poverty.”

Comments are disabled
NEXT ARTICLE
Can a New Model for Cities Thrive in Honduras?
May 14, 2012
PREVIOUS ARTICLE
Spectra Precision Enables Electronic Center for Management of Geodata
May 14, 2012