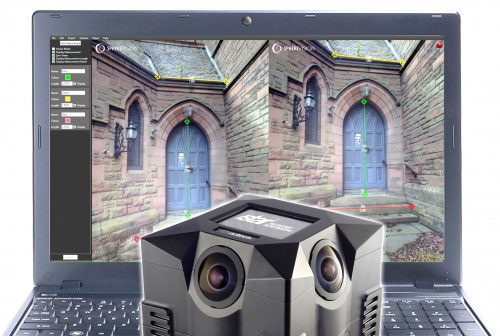 The ability to capture measurements from iSTAR 360 degree imaging is in addition to the existing functionality of SphereVision Project Builder. The 360 degree imaging software already allows for the integration of 360 media with maps, plans or layouts, that can used to create an interactive view by linking rich media such as video, audio and documents.

This announcement by Arithmetica, the company behind the SphereVision 360 degree video recording systems and software, follows a partnership agreement with NCTech. The arrangement with the Edinburgh based developer of reality imaging systems sees Arithmetica join the “NCTech Integrated” partner community, and allows for the integration of a new software development kit (SDK) for measurement within the SphereVision Project Builder software suite.

Mark Senior, Business Development Manager at Arithmetica, commented, “SphereVision Project Builder allows users to create truly immersive and interactive 360 degree environments with integrated documents, plans, and layouts as well as additional visuals and audio. The ability to easily capture and share measurements from iSTAR imagery takes professional applications of 360 imaging to the next level, and we are excited to become one of the first members of the NCTech Integrated partner community.”

Neil Tocher, Chief Technology Officer at NCTech, added, “We have developed the NCTech SDK in response to requests from users who want a faster way to generate measurements from their existing recording systems. Our open strategy makes highly valuable functionality, like the Measurement Module, more universally and synergistically accessible from within third party software, like Arithmetica’s SphereVision.”