Engineering the Olympic Games in Rio 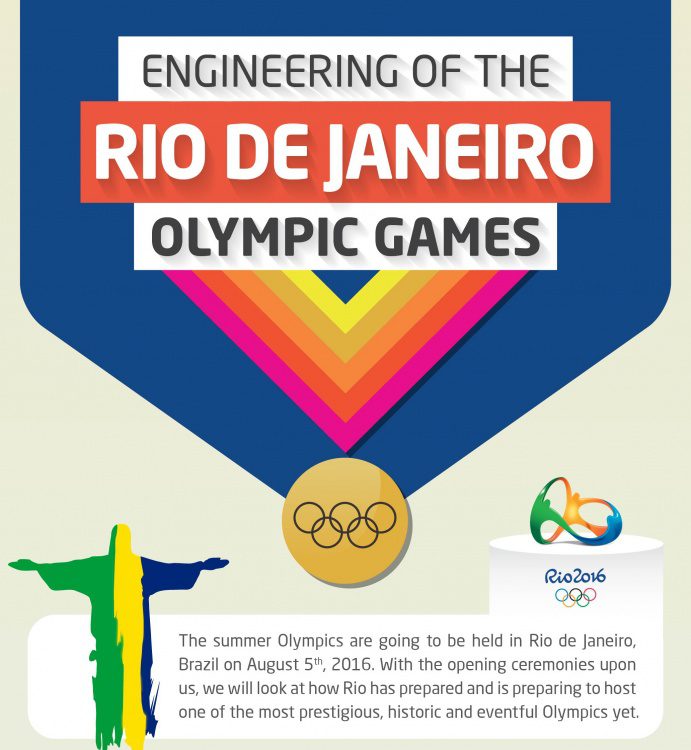 On August 5, 2016, all eyes will be on Rio de Janeiro for the opening ceremonies of the summer Olympics. It will be three weeks of intense competition and inspiring performances from the world’s top athletes. As it draws near, we look at how the city is preparing to host this prestigious event, including the work of civil engineers who played a pivotal role in building the infrastructure and stadiums for the event.

To learn more checkout the infographic below created by the New Jersey Institute of Technology’s Online Master in Civil Engineering degree program.

This is the first time that the games will be held in South America. There is immense pressure for Brazil to deliver. The whole country is praying for the success of the event despite all of the challenges. Vast resources have been mobilized to ensure that all participants and spectators will have a good experience in the city.

Billions of dollars were spent to build 14 different venues. Much of this was allocated for the main Olympic park, which has a total area of 44 acres. The central tennis court alone has a seating capacity of 10,000 spectators. Fans will have plenty of opportunities to watch the best of the best in action. This will be surrounded by smaller courts with capacities ranging from 250 up to 5,000.

The infrastructure around the city is being improved as well. For instance, a subway line was extended by 16 kilometers to facilitate travel to the stadiums. In fact, the entire public transport system has been improved just in time for the games. The train system has been renovated and four new bus lines have been added. All of these are part of high-performance integrated network that links key areas of the city. An Olympic Village was also built to accommodate athletes and coaches. It sits on a 185-acre property and has 17,700 beds across 31 condominium buildings.

The Major Concerns over Rio 2016

Rio is definitely going all out to make this event a resounding success. However, the developments are being overshadowed by a growing number of concerns. Displacement, social tensions, environmental problems, water crisis, and ticket sales are just some of the major issues on the minds of observers. It is estimated that 8,000 families have been displaced due to the aforementioned construction projects. They were removed from their homes in order to make way for the World Cup and the Olympics. Around 67,000 people were evicted from shantytowns since 2009 when it was announced that Rio was chosen as host city.

Pollution is also making alarm bells ring. The Guanabara Bay is filled with garbage and raw sewage. It was promised that the city would clean it up by 80% but this seems like an uphill challenge. The International Olympic Committee president said that the surface is 60% clean as of May 2016. A lot more work is necessary to achieve the goal. To make matters worse, the country is currently facing its worst draught in the last 40 years. This is not only a source of inconvenience to city dwellers and economic hardship for the farmers. It also puts a question mark on power generation. Brazil is 70% dependent on hydro electricity. Draughts can easily lead into an energy crisis.

The increase in public spending has led to a rise in economic activity. Criminals were quick to capitalize on this. Incidents of mass robbery, armed assaults, and other street crimes rose around the city. The police will have to step up to keep locals and visitors safe as they move around during the games. The Zika virus is another threat that’s making headlines around the world. The number of infections reached 1.5 million all over the country in 2015. Rio has the largest concentration with 26,000 suspected cases. Many athletes already declined their slots because of this issue.

Brazil has been struggling to recover from an economic crisis. Critics blast the government for spending huge sums on the Games while the population is having difficulties making end meet. To add insult to injury, the total infrastructure spending exceeded the target by 25%. The quality of construction leaves a lot to be desired as well. The $12.6-million elevated warfront was finished early but it collapsed after being hit by a large wave. This calls the quality of the other projects into question. Ticket sales are trickling slowly with only half being sold by April 2016.

What Changes Can Rio See in the Aftermath of the Olympics?

Despite all of these concerns, people remain optimistic about the outcome of the Games. The IOC claims that the venues are almost complete and only finishing touches are required. The hope is that the Olympics can have lasting positive effects on Rio as it did for London after 2012. For instance, the London Olympic Village was converted into affordable housing for the locals. This model may be followed in Rio de Janeiro to improve living conditions for thousands of families.

The improvements in the public transport system will also benefit communities for decades to come. The old one was only able to serve 38% of the population but now it has the capacity to serve 66%. Travel time will be slashed thanks to the new metro line from Ipanema to Barra. This would normally take one to two hours but now it will only take 13 minutes. It can carry as much as 300,000 per day. This should decongest the roads as motorist switch to this faster mode of transport. Traffic should ease and worker productivity will increase as less time is wasted during their commute.

The organizers have already planned what will happen to the different venues. For instance, the handball arena is going to be dismantled and then repurposed into public school buildings. The aquatic sports center and the golf course will continue to serve the public. One of the gymnasiums will be turned into an experimental sports school and another will be a training center for elite athletes. The primary beneficiary of all these will be the poor who will have easy access to world-class facilities for the first time. There’s a lot of work to be done but the basics are already in place for the city’s transformation.