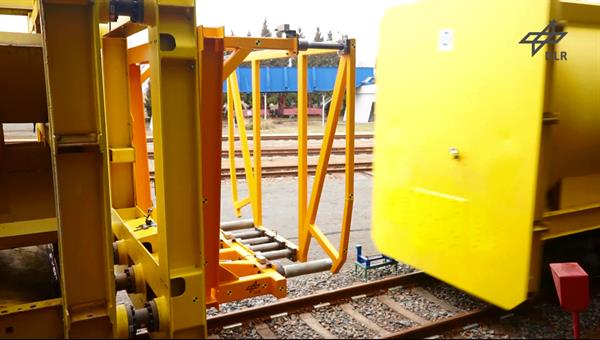 Rail accidents, even those that occur at low speeds, can have devastating consequences – in many cases, hundreds of tons of moving mass collide with each other, and carriages crash into each other or even derail. In order to protect passengers and crew members and minimise the consequences of accidents, researchers at the German Aerospace Center (Deutsches Zentrum für Luft- und Raumfahrt; DLR) have developed a new kind of crash concept. It involves the use of special crumple zones, which are located outside the passenger section. In the event of an accident, these crumple in a controlled manner, absorbing a large amount of the energy produced upon impact.

The DLR Institute of Vehicle Concepts in Stuttgart developed the concept, which is part of the extensive research being conducted in the Next Generation Train (NGT). The aim of the project is not only to reduce travel time, but also to make rail transport safer, more comfortable and more environmentally friendly. Lightweight designs and construction play a key role in achieving these objectives – the mass of rail vehicles has a direct impact on energy consumption due to driving resistance. Less weight has a positive impact on cost and environmental factors. Therefore, DLR engineers want to build the lightest possible wagons. This means that a new crash concept is also needed.

“Our main idea was to develop a highly efficient crash structure, which also forms an integral part of the carriage: in other words, not an additional component that is added on and increases weight, which is the case in the concepts currently being used,” explains Michael Zimmermann, the researcher responsible for the crash concept. With this in mind, DLR researchers are looking into the principle of functional integration of lightweight constructions, most notably achieving the maximum amount of functionality with the minimum amount of components. Several such crash zones exist all over the train in the NGT. They can be found in the door modules, that is to say, the boarding areas located at each end of the carriage. Deformation of these areas is less critical than in passengers seating sections. “We are not only trying to make the crash concept highly efficient and light, but also the carriage structures that follow, such as the chassis and passenger module. The crash concept reduces the force exerted on these areas during a collision. This then enables us to reduce the weight significantly during construction,” says Zimmermann.

The crash elements consist of a metal frame and several built-in metal tubes that run in a longitudinal direction. These rods are the central components that absorb the energy produced during the crash. The energy that is converted during this process is based on the tapering tubes: the force produced by the collision causes the tubes to be pushed through a section that is becoming ever narrower. This controlled deformation process enables a large proportion of the kinetic energy produced by the collision to be absorbed. The frame and the areas behind the frame remain largely intact.

To show the functionality of the crash concept in practice, DLR researchers built a prototype made of new, high performance steel that is being used in key areas of the crash concept. The steel is strong and ductile – two properties that are optimal for this intended use.

The performance test was carried out on the crash structure at the TÜV Süd train crash facilities in Görlitz. Zimmermann and his team fitted the prototype onto an 80-ton cargo tanker carriage and installed sensors to measure the energy flow, as well as measuring points and trigger contacts for high-speed cameras that recorded the test. A locomotive then accelerated, bringing a second cargo tanker up to a speed of 18.5 kilometres per hour, which then crashed into the test wagon. The results were quickly apparent: the structure had worked as expected and absorbed the energy produced during the impact in such a way that none of the carriages were damaged, and the stationary carriage only moved backwards ever so slightly and at a low speed.

Once the test had been carried out successfully and DLR researchers had the measurement data, they headed back to Stuttgart. Their next task is to compare the data on deformation and force flux, which they obtained from the test, with data acquired during previously conducted simulations. The results will then be used for a crash simulation in which the whole NGT will be used. This will not only take into consideration the areas between the carriages, but also the crash zones of both the first and last carriage on the train. This will then enable the suitability of the entire crash concept to be fully tested virtually – an important basis for future research projects and technology transfer within the industry.

DLR rail transport researchers are exhibiting the crash structure they tested at the international trade fair for transport technology, InnoTrans, from 20 to 23 September 2016 in Berlin