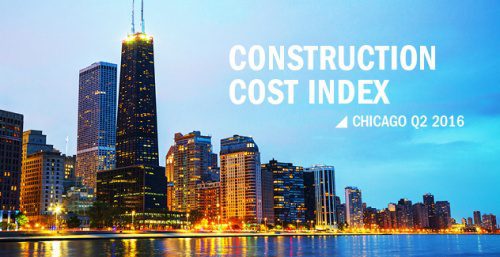 Mortenson Construction has released its quarterly Construction Cost Index report for Chicago along with five other metropolitan areas in the U.S.  According to the report, construction activity in Chicago has increased two percent in the latest quarter after remaining flat through most of 2015. The report cites construction costs growing at a rate above long-term averages and construction employment growth slowing since 2014, leading to a decline in the most recent quarter.

Although the overall Chicago cost index picked up in the latest quarter, the moderation in employment growth should temper costs through the remainder of the year. “We recommend building owners anticipate an annual cost increase of about four percent in the coming year,” said Dennis McGreal, chief estimator at Mortenson’s Chicago office.

In Chicago, Gypsum Board experienced the highest cost increase in the second quarter (vs. Q1 2016), while the largest components of the index – HVAC and Electrical systems – remained relatively unchanged.

Mortenson tracks and reports on six metropolitan areas in the U.S. including Chicago, Denver, Minneapolis, Milwaukee, Phoenix and Seattle. The Mortenson Construction Cost Index is calculated quarterly by pricing representative non-residential construction projects in various metropolitan areas. It is part of a portfolio of industry insights and market studies provided by Mortenson.  The Construction Cost Index is available for download at www.mortenson.com/cost-index.