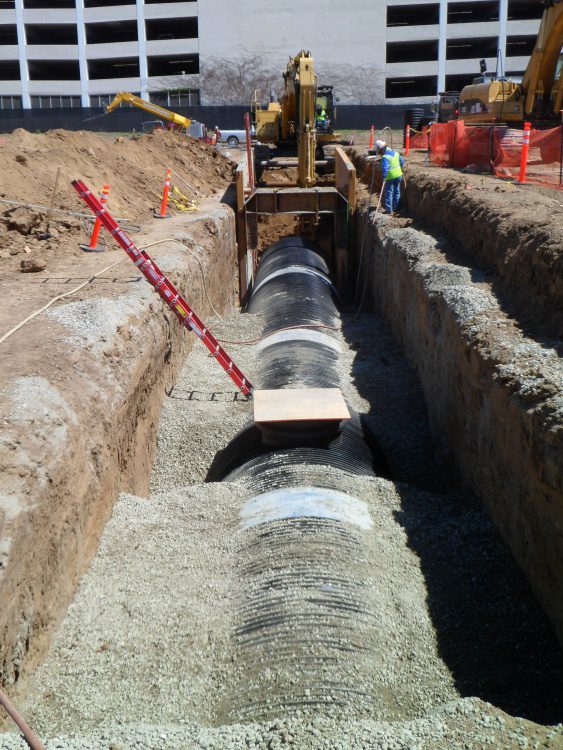 In 1964, the first enclosed shopping mall in California opened its doors. Located in Canoga Park, a neighborhood in Los Angeles’ San Fernando Valley, Westfield Topanga is a two-level, 1.6-million-square-foot indoor shopping center. In 2015, its owners embarked on a major expansion directly across from the original mall. Called The Village at Westfield, the 31-acre expansion is a mixed-use project designed to be a community destination in the heart of the West Valley.

The developer, Westfield Corp., wanted to create something special. They envisioned a new central gathering place for shopping, dining, events, entertainment and leisure. They wanted to provide local residents and visitors a destination experience unlike any other in the San Fernando Valley. But a lot has changed in the last 50-plus years since the original mall opened. 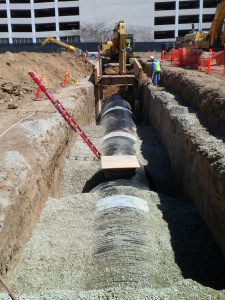 Steel-reinforced polyethylene cisterns were installed as part of the larger system.

Delivering on this vision, while meeting the current strict design criteria and site-specific constraints, would be a challenge. It would require creative thinking, close team collaboration, multiple design and modeling iterations, and progressive stormwater quality BMPs.

It seems most large projects today face ever-increasing complexities with permitting and design, and The Village was no exception. Along with the usual design and construction tasks associated with a large land-development project, the consulting team for The Village would need to address site-specific challenges in three broad categories.

Surface models created in Autodesk Civil 3D were used for a variety of tasks.

The desired site plan called for 570,000 square feet of densely populated retail buildings and nearly 18 acres of open space, walkways, water features, entertainment venues and parking. The relationship of the programmatic elements required to achieve this plan created challenges with the site grading and earthwork as well as the complex web of wet and dry utilities under the site.

In addition, developers had to meet stringent LEED equivalency requirements and the City of Los Angeles’ LID hierarchy. To overcome these challenges, Westfield called on the expertise of civil engineering and surveying firm Fuscoe Engineering Inc., which used both time-tested and modern modeling tools to develop the bulk of the design. Fuscoe partnered with Contech Engineered Solutions to design a series of progressive solutions to meet the stormwater BMP requirements.

The closely spaced buildings and open-air amenities proposed for the relatively flat site presented challenges from the outset. The design had to be functional and pleasant for pedestrians while simultaneously directing rainfall runoff safely and efficiently away from the buildings and other site improvements to appropriate storage and reuse facilities. 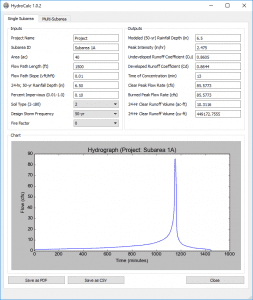 HydroCalc Calculator was used to determine runoff rates and volumes.

“This was a complicated design,” says Greg Mino, P.E., senior project manager with Fuscoe. “Modeling the existing ground surface was easy, working from the information gathered by our survey team.”

However, the proposed surface design was much more involved.

“We looked at three different main approaches to the grading design,” notes Mino. “We worked through countless iterations to adjust the design based on feedback from the architect, owner and our internal design processes, particularly in regards to building locations and elevations.”

To do this, Mino and his team at Fuscoe relied heavily on digital terrain models (DTMs) created using Autodesk Civil 3D. With the surface model built, its usefulness extended beyond setting surface elevations. The 3D nature of the DTM lends itself to a variety of “downstream” tasks, including automatic delineation of runoff catchments areas, runoff flow paths, and calculating earthwork cut and fill volumes. It also played an important role in establishing the elevations of the proposed underground utilities. When the “digital dust” had settled, site development would require earthwork of nearly 350,000 cubic yards, including utility spoils.

With the major aspects of the grading design in place, Fuscoe turned its attention to the hydrologic analysis and hydraulic design. To meet county requirements, Mino used the Los Angeles County Department of Public Works’ (LADPW) HydroCalc Calculator, Microsoft Excel, and inputs extracted from the Civil 3D model to calculate runoff rates and volumes for various storm events. 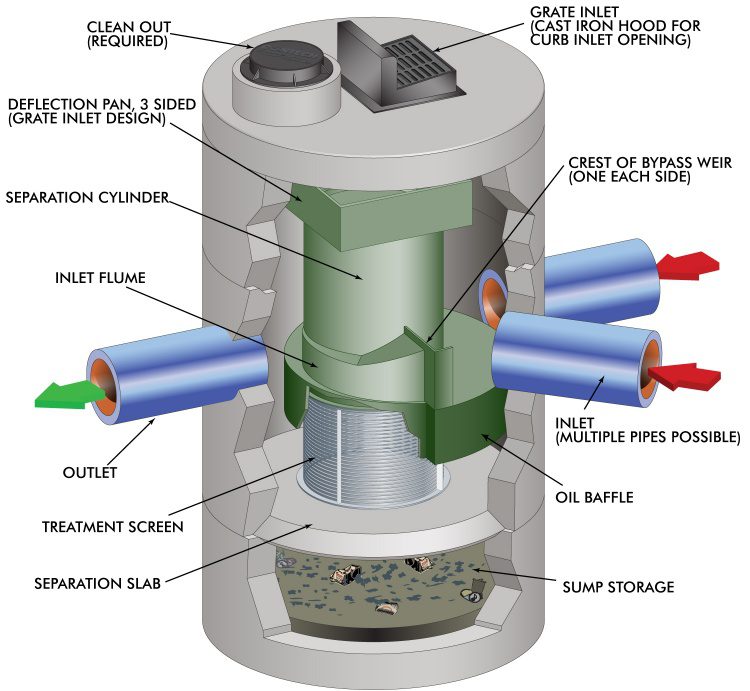 The Contech CDS® Pretreatment System pretreats captured water before it enters the system.

“HydroCalc is a proprietary software program from LADPW, which is used throughout the county,” explains Mino.

Based on the hydrologic analysis, “first flush” stormwater runoff from the site would peak at nearly 65,000 cubic feet, and all this water needs to be collected, treated, stored, released and/or reused. The first task was to convey the runoff to the proposed treatment and storage units. To size the pipes, Mino turned to an application used extensively in L.A. County: Water Surface Pressure Gradient software.

LID is a stormwater-management approach with a basic principle modeled after nature: manage rainfall at the source using uniformly distributed decentralized microscale controls. The goal of LID is to mimic the undeveloped runoff conditions of the development site with post-development conditions.

In 2014, the County of Los Angeles revised LID requirements for development occurring within unincorporated portions of the county, resulting in a nearly 500-page LID Standards Manual that The Village development had to follow. To meet the LID hierarchy and LEED requirements, Fuscoe Engineering worked with Contech Engineered Solutions to design a series of stormwater quality BMPs, including rainwater harvesting and reuse for irrigation.

“The stormwater quality design on The Village was incredibly involved, intricate and interrelated,” adds Mino. “We needed a strong partner to help execute the design and facilitate the installation of the various stormwater treatment BMPs specified throughout the project site.”

To capture and reuse stormwater from roofs, parking lots and other impervious surfaces, and to use the water for irrigation, the team designed a solution utilizing three UrbanGreen Rainwater Harvesting Systems. Each uses a CDS hydrodynamic separator to pretreat the captured water prior to entering the cisterns. 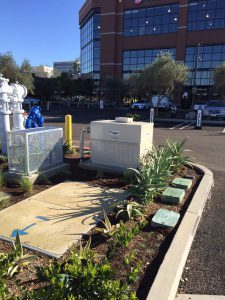 Pumps were used to overcome the site’s hydraulic limitations.

“CDS is an underground stormwater treatment device that uses swirl concentration and continuous deflective separation to screen, separate and trap trash, debris, sediment and hydrocarbons from stormwater runoff,” explains Mac Leod. “It consists of the inlet cylinder, stainless-steel separation screen, and concrete manhole barrel section. The indirect screening capability of the CDS allows for 100-percent capture of floatables and neutrally buoyant material that is 4.7 millimeters or larger without binding.”

Pretreatment is an essential component of rainwater harvesting and a requirement for LID designs.

“It prevents sediment, organic material and other debris from damaging or clogging the system, and it reduces maintenance costs,” adds Mac Leod.

After pretreatment, runoff water is stored in underground cisterns made from 80ksi steel-reinforcing ribs encased in pressure-rated polyethylene resin. Due to the limited space for the cisterns, Thomason designed a multi-barrel system to fit the restricted footprint. The site’s flat geometry imposed limits on the ability to convey runoff via gravity to the storage tanks. To overcome this, Thomason included the use of sump pumps to bring water to the cisterns.

Making It All Fit

Everyone who has worked on a dense infill site understands the challenges of ensuring that each individual system satisfies design criteria while working in the context of other utility systems. The tight spaces, large number of differing utilities and LEED/LID-required stormwater systems made the underground utilities at The Village even more challenging, requiring “a surgical execution” of the utility network.

To ensure the massive network of storm, sanitary, water, gas, electric and communication utilities all fit in the limited spaces, and to reduce or eliminate spatial conflicts, Fuscoe relied heavily on 3D models created in Autodesk Civil 3D.

“We used information from a variety of sources to create the models,” notes Mino. “For internally created files, we incorporated data from PDFs from LADWP, gas and phone utilities; and CAD drawings from Contech. In ‘busy’ areas, we modeled everything. In easier areas, we only modeled the critical systems.”

The Village at Westfield enjoyed its grand opening in September 2015 to the delight of tens of thousands of visitors on the first day. As they enjoyed the live entertainment, children’s play areas, koi ponds, bocce ball courts and seemingly unlimited shopping options, most people likely gave no thought to the extensive engineering efforts and systems making it all possible.

“Stormwater management BMPs are such an important part of nearly every design these days, it’s now its own active discipline at [Contech],” says Mac Leod. Added Fuscoe’s Mino, “Contech was our counterpart; from design through to commissioning.”