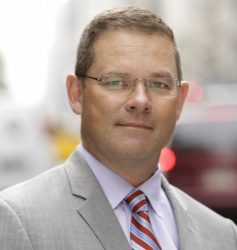 Skanska is a global construction and development company with a long history of public-private partnerships (P3) to design, build and operate large infrastructure projects. The company is working on the I-4 Ultimate Project in Orlando, Fla., which currently is the state’s largest transportation project, and recently opened the Elizabeth River Tunnels project underneath the Elizabeth River in Virginia. Most recently, the firm reached a financial close and executed a lease agreement with the Port Authority of New York and New Jersey for the redevelopment of LaGuardia Airport’s Central Terminal B in New York City as part of the LaGuardia Gateway Partners. Johan Henriksson, executive vice president of Skanska Infrastructure Development, North American Region, is leading that effort.

This public-private partnership includes taking over operations of the existing Central Terminal Building and designing, building, financing, operating and maintaining a new replacement terminal for a lease term through 2050. The agreement also includes construction work for supporting infrastructure and a new central entrance hall.

LaGuardia Gateway Partners is composed of Skanska, Vantage Airport Group and Meridiam for development and equity investment; Skanska Walsh as the design-build joint venture; HOK and WSP | Parsons Brinckerhoff for design; and Vantage Airport Group for management of operations. LaGuardia Gateway Partners is contributing more than $2 billion, and the Port Authority is contributing more than $1 billion to construct the airport and supporting infrastructure. This is the largest P3 project in the United States.

I2: Can you talk about your personal P3 experience and the factors that are driving Skanska to take on more of these projects?

Henriksson: I have 20 years of experience at Skanska, and I’ve been working on P3s for the last 15 years on and off. Skanska has 20 years of experience with P3 projects, starting in the United Kingdom, and we’ve done projects in the Nordic countries, Europe, Africa and South America. We do have extensive experience with P3 projects, and I think that’s part of the reason we have been successful putting together some of the largest P3 projects in the United States. The most recent is the LaGuardia project, which we closed last month.

The experience that we’ve gained in past projects is now being utilized here in the United States. We’re very excited about where we are and with our prospects going forward.

I2: Is there a standard transaction in terms of financing through to operations on these projects?

Henriksson: Many talk about this as a way of financing projects, but it’s actually more than that. It’s about how to allocate risk on a project, with design risk, construction risk as well as risk over a longer operation period. When you design a project, we talk about financing risk as well as equity risk. Skanska has had success coming up with a good risk allocation, inviting the best partners to handle these risks, and we also take away risk from the public side.

Increasingly, the public sector is saying that the private sector is better equipped to handle some of these risks. For example, for construction risks, we have construction companies as part of our group, and that’s what we do for a living. We also invest. To take the risk away from the public side, but allowing them to keep control of the process and making sure that the public requirements are being met; that’s when you see the best for both worlds.

It’s more than financing. It’s about risk allocation and executing construction in the most-efficient fashion.

I2: Can you speak to the bottom-line benefits for both sides?

Henriksson: Skanska is a public company listed on the Stockholm Stock Exchange. We have a profitability requirement to live up to. I think it’s important to remember that when we take on a construction project with a P3 structure, we are first guaranteeing the price to the public, we are also guaranteeing a date that the project will be complete. If there are cost overruns, that doesn’t impact the public, as it’s a risk we take on. We feel comfortable with that risk, as construction is what we do for a living.

In some of these big transactions, like LaGuardia, the construction risk gets very complicated. For LaGuardia, we are building a new terminal right next to the old one and ensuring that we don’t impact the operations of the airport. It’s business as usual at the airport, with flights going in and out. To build something complex, without disturbing the ongoing operations, that is a huge challenge.

There are very few players in the world that have the knowledge and have the balance sheet to support that risk. You need to have a good rating and good track record to take on this level of risk. That is something that Skanska does extremely well.

I2: What role do modeling tools and associated technology have in driving down risk and ensuring quality?

Henriksson: BIM is very important for us in how we design and structure the project. At LaGuardia, for example, in order to build a new terminal without disturbing the traffic, you have to build it in phases. We’ve already started demolition of certain parts of the existing airport. We’re building two concourses; one that will be done in 2018. The arrival and departure hall, security screening, etc., will be in place in 2020. We are taking away something old and building something new. In order to build this in phases, we have to move planes to temporary gates while we finish the new part. If we didn’t have BIM, we would not be able to phase this in an efficient way.

Given the fact that the terminal will open in 2020, it’s an accelerated schedule and, at the same time, traffic is not going to be disturbed at all. We’ll have the same number of gates and the same number of flights coming and going. This is a very advanced project, and something that Skanska does very well.

I2: In terms of the financial connection with the schedule, can you speak to the process of deadlines and partner commitments to keep everything on time?

Henriksson: We are construction people, and with LaGuardia, it’s an airport. We don’t run airports for a living, so when we are designing an airport, we need to make sure that we partner with those that know and can run airports. That’s why, when putting together P3 structures, it’s really important that you have your best partners with you.

In this case, we are teaming up with Vantage Airport Group, which has great experience from the Vancouver Airport. They know how to run terminals; they know how you place amenities that are attractive to passengers and that also work for the businesses. They know how to support the nice amenities of concessions and restaurants that are an important driver for the design as well as the operations of the terminal. They provide input to make sure there’s a nice experience for the passenger.

A P3 involves important interactions among different disciplines and partners to come up with an optimal solution.

I2: What’s unique and interesting about the new LaGuardia terminal?

Henriksson: We’re moving the whole terminal much closer to the Grand Central Parkway. By doing that, we’re freeing up lots of space on the other side, on the aprons where the airplanes move around. One of the big challenges today, and perhaps you’ve experienced it, is that you get on an airplane at LaGuardia, and then you sit on the taxiway and wait for a long time before you can takeoff. There’s congestion on the ground.

With the new design, there are long pedestrian bridges that go out from the terminal high in the air so the new bigger airplanes can go beneath them. This makes it possible to access the gates from different locations. This creates much more mobility than today, where airplanes go in and have to back out.

It’s another example where design is extremely important. To have the right design so we fulfill the requirements for the client, the Port Authority, and fulfill the requirement of the airport operator and the flying public. The design was one of the reasons the Skanska team was selected to carry out this project.

I2: I have been to the current airport within the last five years, and it is greatly in need of improvement.

Henriksson: Absolutely. The LaGuardia Airport was built in 1964, and not many upgrades have been done over the years. With this terminal, I think it will jump to the front of the pack compared to other airports in the area and to other airports in the United States and internationally. I think the terminal will be state-of-the-art, and we are very excited about it. I think it will have a great feel and offer a terrific experience. Looking at the renderings makes me feel great, and I can’t wait to walk along one of those pedestrian bridges with of Manhattan.

I2: Can you speak to the timeline of the project and what’s already underway?

Henriksson: We started demolition, and we already have 500 people working on the project. We were selected the first bidder over a year ago, and the Port Authority gave us an initial contract to get started with design and early demolition work.

The construction team will peak at about 2,000 people at the end of 2017. It’s a fast-track project to build this in an ongoing airport and to have it substantially completed by 2020. The construction is divided into six different phases.

We are building something called the Central Hall that extends from the new terminal to the two other terminals operated by Delta Airlines. There are plans in place with the Port Authority to also develop those terminals with a synchronized architecture and style to what we are building.

The future vision is that all the terminals will be connected, and we are preparing for that future connection with the Central Hall that is an arm extending out toward the other two terminals outside of our scope of work.

I2: You’ve been doing P3 projects for so long. Do you feel these are the way forward for large infrastructure projects?

Henriksson: We love P3 deals at Skanska, and we want to do more. We think it’s an excellent way to get big and complicated infrastructure projects off the ground. The Port Authority has been talking for more than a decade about the poor quality of the old LaGuardia terminals, but they have not been able to upgrade or fix it. Combining the public need with private expertise is a great way of enabling the projects to get off the ground.

What’s been very important in this project is a very strong commitment from the Port Authorities and from Governor Cuomo. Without their vision, support and courage, this would never have happened. I really hope that we’ll see more courageous authorities to make similar bold decisions.

Skanska is the biggest civil construction company in New York, so this is really our backyard. We have lots of knowledge and experience putting these deals together with the right partners so that we can do this in a smart and efficient way. At the end of the day, the taxpayers and the passengers of New York will be the winners here. 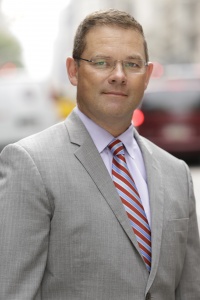