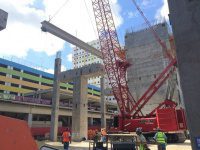 MIAMI – June 20, 2016 – The first of 247 massive precast concrete beams (also known as Florida I Beams or FIBs) was lifted into place at MiamiCentral Monday afternoon, as the 11-acre transportation hub continues to take shape in Downtown Miami. The beams average 73 feet in length and the largest spans are in excess of 120 feet. Approximately four FIBs will be installed each day over the next eight to ten weeks.

The FIBs, produced in Tampa and trucked to Miami, sit on spring vibration isolators at the top of the rail column capitals which are approximately 50 feet high. The isolators prevent vibration throughout the structure of the building. The Brightline train tracks will be installed on top of a concrete slab which will sit on the FIBs.

The work is being managed by Suffolk Construction, who is overseeing the overall construction of MiamiCentral.

MiamiCentral encompasses nearly three million square feet and includes two sites: a nine-acre transportation hub in downtown Miami just east of the Miami-Dade County Hall, and a two-acre site in Historic Overtown. MiamiCentral will include mixed-use development with residential, office, commercial and a retail concourse, while serving as a connector between Brightline’s passengers and Miami’s existing public transport systems.

MiamiCentral will also include Central Fare, featuring six restaurants and more than 20 food and retail purveyors. Central Fare will be a unique culinary destination, showcasing the talents of both local and national artisans, tastemakers and chefs, including celebrity chefs Bryan and Michael Voltaggio; Richard Hales of Blackbrick Chinese; and Andres Barrientos and James Bowers of Miami Smokers, among others. Office tenants at Two MiamiCentral include Ernst & Young LLP (EY), Regus, Cisneros and Moss Construction.

The Overtown site, Three MiamiCentral, is also a mixed-use development with retail, commercial and parking to support and enhance the transportation hub.

At MiamiCentral, the Brightline train platform will be elevated to align with existing public transportation systems, with retail spaces located beneath. This bold and innovative design allows thru-streets to remain open to traffic and creates an atmosphere of walkability as well as a landmark terminal.

Construction on Brightline’s stations and trains is progressing for a scheduled service launch next summer. At the Siemens facility in Sacramento, the first Brightline locomotive will be tested soon and the first full trainset is scheduled to arrive in West Palm Beach this fall.  Vertical construction is well underway on Brightline’s train stations in Fort Lauderdale and West Palm Beach.