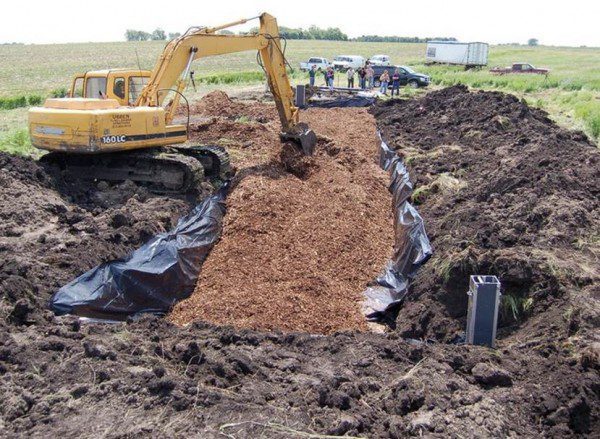 Water quality scientist Laura Christianson is working on a solution to the “dead zone”—an area with dangerously low levels of oxygen— in the Gulf of Mexico. Christianson lives over a thousand miles north of the Gulf in Illinois. But human activity in the Mississippi River basin, which connects to the Gulf, can lead to major water quality issues downstream.

In many Midwestern states, farmers use tile drainage to keep their fields from being waterlogged. Pipes buried three to four feet below the surface route water into the Mississippi watershed. The tile pipes keep the fields dry, but they also send large amounts of nitrogen downstream. Nitrogen is a naturally occurring nutrient in the soil and a common ingredient in fertilizer. Extra nitrogen in the water causes problems for aquatic ecosystems.

Christianson researches ways to reduce the amount of nitrogen that moves downstream with woodchip-filled trenches. Their job is to intercept the water’s journey from field to rivers and streams. The trenches are called bioreactors.

The trenches themselves aren’t the main heroes. It’s the bacteria that live in them that neutralize the nitrogen threat. “Good bacteria colonize the woodchips, and use them as food,” said Christianson. This concentrated food source gives bacteria extra energy to convert nitrogen into benign gas. Christianson said she was captured by the simplicity of bioreactors. “We’re enhancing a natural process,” she said. “There’s an elegance to it.”

States in the upper Mississippi River basin like Minnesota, Iowa, and Illinois are hot spots for nitrogen in drainage water. “There are 10 million acres of tile-drained fields in Illinois alone,” said Christianson.

The EPA challenged the twelve states that border the Mississippi River to reduce the amount of nutrients that leach down the river and into the Gulf of Mexico. Rainfall and irrigation pulls nitrogen from the soil and deposits it in the ocean, where algae feed on it. Eventually the algae outcompete other life forms for sunlight and oxygen. Further, when the algae die, the decomposition process eats up all the dissolved oxygen in the water. The resulting “dead zone” in the Gulf of Mexico is over 5,000 square miles.

Bioreactors aren’t only useful in the agricultural sector. Christianson said that in the last 5 to 8 years, the interest in bioreactors as a water quality solution has grown. Scientists are using bioreactors as a low-cost way to reduce pathogens in municipal and aquaculture wastewater. More states are getting on board, and new studies from different parts of the world add location-specific complexity to the research.

Bioreactors have a simple construction. Although sizes vary, a typical trench is 100 feet long and 20 feet wide, and covered by one foot of top soil. The trench is generally 3.5 feet deep and filled with carbon-rich food sources for bacteria, like woodchips or corn. Tile pipes from the fields are re-routed through the trench before flowing into the stream.

Despite the simple design, there are complex challenges when using bioreactors. “We’re constantly trying to improve the design,” said Christianson. “Much like humans, bacteria don’t do their job as well when they are cold.” The bacteria aren’t as efficient at reducing nitrogen in the Midwestern spring months, when the snow melt starts filtering through. Bioreactors also need to be refilled every ten years or so with woodchips or another source of carbon to keep the bacteria well fed.

Christianson said that although some grants offset the cost of installing a bioreactor, encouraging farmers to participate is a hard sell. “We’re asking farmers to shell out money for a public benefit, and that’s not easy when you’re trying to make ends meet,” she said.

Despite the challenges, the uses of bioreactors to improve water quality continue to diversify and their performance continues to improve.

To read more about the latest in bioreactor research and implementation in Journal of Environmental Quality, click here.