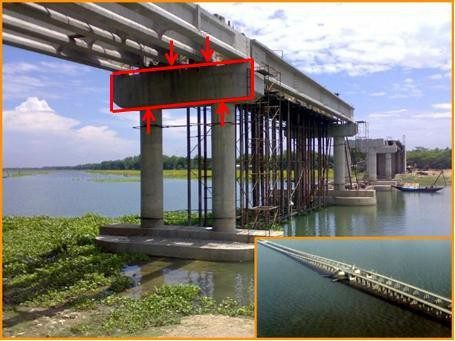 Concrete deep beams have relatively small span-to-depth ratios, so that shear strain becomes dominant. Hence, traditional sectional-design approaches based on plane sectional theory are not applicable for designing deep beams in which the plane section does not remain plane. A different approach is therefore required. Externally applied loads in deep beams are transferred directly to the supports by strut action (Photo 2). As a result, provisions—such as in ACI and CSA—recommend the use of the strut-and-tie model (STM) in designing reinforced-concrete deep beams.

The STM is an approach used to design discontinuity regions (D-regions) in reinforced-concrete structures to reduce the complex states of stress into a truss comprised of simple, uniaxial stress paths (Photo 3). The members of the STM subjected to tensile stresses are called ties and represent the location where reinforcement should be placed, while the members subjected to compression are referred to as struts. The points where truss members intersect are called nodes. If the forces acting on STM boundaries are known, the forces in each of the truss members can be determined using basic truss theory.

An extensive experimental study was conducted in the Department of Civil Engineering at the University of Sherbrooke (Quebec, Canada) to propose a strut-and-tie-based model to predict the shear strength of FRP-reinforced deep beams (Photos 4 and 5). An assessment of the available STMs in ACI and CSA provisions was conducted, identifying the important parameters affecting the strut efficiency factor. The data from the 28 specimens with and without web reinforcement, including 16 tested FRP-reinforced concrete deep beams in this study and 12 FRP-reinforced deep beams collected from the literature, were used to assess the proposed model.

In the words of Ahmed Sabry Farghaly, PhD, postdoctoral researcher in the Department of Civil Engineering at the University of Sherbrooke, “ACI 318 (2011) provisions do not take into account these parameters in calculating βs. Moreover, the constant values of βs equal to 0.6 and 0.75—assigned for specimens without and with minimum web reinforcement, respectively—place the prediction in the upper limit of the data cloud, leading to an unsafe estimation of the deep beam’s capacity. On the other hand, the efficiency factor in CSA S806 (2012) explicitly accounts for ε1, implicitly considers the effect of a/d through the term cot2θ, and does not account for the effect of fc’. Nevertheless, the efficiency factor provided by the CSA provision lies on the lower limit of the data cloud, leading to a conservative but uneconomic estimation of the deep beam’s capacity.”

Through this research, the effect of the different strength-related parameters on the strut efficiency factor was assessed based on the experimental results in the literature and that from the conducted experimental program. A new strut efficiency factor for the STM-based procedure was proposed and validated with FRP- and steel-reinforced deep beams. According to Brahim Benmokrane (corresponding author), a professor of civil engineering at University of Sherbrooke and Tier-1 Canada Research Chair in Advanced Composite Materials for Civil Structures and NSERC Chair in FRP Reinforcement for Concrete Structures, “these results reveal the rational criteria of the new proposed model and its applicability for engineers in designing concrete structures reinforced with FRP bars that incorporate the strut-and-tie model.”

The research can be found in a paper titled “Strut Efficiency-Based Design for Concrete Deep Beams Reinforced with FRP Bars,” accepted and soon to be published in the ACI Structural Journal.