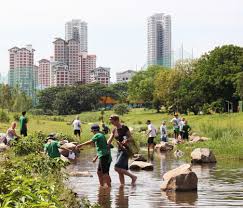 It is not even 7 in the morning, and even though dawn has just broken, it is already well above 75 degrees with high humidity. Despite this, as we walk into Bishan Park, several large groups of older Singaporeans are graciously performing synchronised Tai Chi to a taped recording of instructions blazing into the hot air.

The park is vibrant with joggers, young couples out for a morning walk with baby in tow, and older ladies chatting on the bench. Leonard Ng Keok Poh, Head of Ramboll Studio Dreiseitl and a key figure behind the landscaping masterplan of Bishan Park shows us to the middle of a walkway bridge that crosses a green river bed running through the park.

“They started out by asking us to help us with the mosquito problem,” Leonard Ng Keok Poh says.

A delegation of Danish officials, including Morten Kabell, Mayor for Technical and Environmental Affairs at City of Copenhagen, and Steen Christiansen, Mayor of the City of Albertslund, went on a stroll in Bishan Park on Wednesday, guided by Ramboll’s experts.

The river bed used to be a 2.7 km straight concrete drainage channel but has now been converted into a sinuous, 3.2 km long natural river that meanders through the park.

“We told them that we would like to start in another place. As we have added plants and the river has become healthier, the biodiversity here has improved with many different species of birds and insects to keep the mosquitoes at bay”, he explains.

A maximum benefit for park users

62 hectares of park space have been redesigned to accommodate the dynamic process of a river system which includes fluctuating water levels, while providing maximum benefit for park users.

Three playgrounds, restaurants, a new vantage point constructed using the recycled walls of the old concrete channel, and plenty of open green spaces complement the natural wonder of an ecologically restored river in the heart of the city.

The two Danish mayors recognise many elements of the mindset of change that is necessary for such a project to become a success:

“I was surprised by the scale of the park. In such a condensed city as Singapore, it is great to see this large green space being given priority,” says Steen Christiansen.

The two mayors are attending the Mayor’s Forum, a central element in three large related events in Singapore 10-14 July 2016. The event focuses on urban solutions and gathers more than 5,000 key urban stakeholders from around the world.