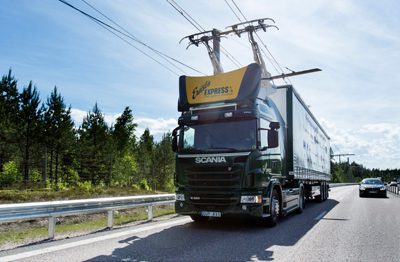 The opening of the world’s first eHighway in Sweden took place in late June. The country’s Minister for Infrastructure, Anna Johansson and Minister of Energy, Ibrahim Baylan inaugurated the first eHighway system on a public road. For the next two years, a Siemens catenary system for trucks will be tested on a two-kilometer stretch of the E16 highway north of Stockholm. The trial will use two diesel hybrid vehicles manufactured by Scania and adapted, in collaboration with Siemens, to operate under the catenary system. “The Siemens eHighway is twice as efficient as conventional internal combustion engines. The Siemens innovation supplies trucks with power from an overhead contact line. This means that not only is energy consumption cut by half, but local air pollution is reduced too,” says Roland Edel, Chief Engineer at the Siemens Mobility Division.

Transport accounts for more than one third of Sweden’s CO2 emissions, with almost half of that coming from freight transport. As part of its climate protection strategy, Sweden has committed to having a fossil fuel independent transport sector by 2030. Due to the expected growth in freight transport, road freight is set to grow even as rail capacity is increased. A solution to decarbonized road freight is therefore necessary. During the two-year trial, Sweden’s Transport Administration Trafikverket and Gävleborg County want to create a knowledge base on whether the Siemens eHighway system is suitable for future long-term commercial use and further deployment. “By far the greatest part of the goods transported in Sweden goes on the road, but only a limited part of the goods can be moved to other traffic types. That is why we must free the trucks from their dependence on fossil fuels, so that they can be of use also in the future. Electric roads offer this possibility and are an excellent complement to the transport system”, says Anders Berndtsson, chief strategist at the Swedish Transport Administration.

The core of the system is an intelligent pantograph combined with a hybrid drive system. A sensor system enables the pantograph to connect to and disconnect from the overhead line at speeds of up to 90 km per hour. Trucks equipped with the system draw power from the overhead catenary wires as they drive, enabling them to travel efficiently and with zero local emissions. Thanks to the hybrid system, operation outside of the contact line is also possible, thus maintaining the flexibility of conventional trucks. The eHighway technology features an open configuration. As a result, battery or natural gas solutions, for example, can be implemented as an alternative to the diesel hybrid drive system used in Sweden. This allows the system to be adapted flexibly to the specific application.

Siemens is currently developing another eHighway demonstration project in California. This project is being undertaken in collaboration with vehicle manufacturer Volvo on behalf of the South Coast Air Quality Management District (SCAQMD). Tests will be conducted throughout 2017 to see how different truck configurations interact with the eHighway infrastructure in the vicinity of the ports of Los Angeles and Long Beach.