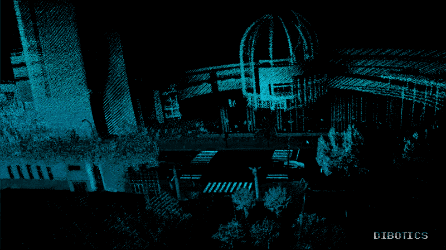 Under the agreement, Dibotics will provide consulting services to Velodyne LiDAR customers who require 3D SLAM software, while Velodyne will assist Dibotics in enhancing its technology when deployed with Velodyne’s 3D LiDAR sensors.  In robotic mapping, SLAM (simultaneous localization and mapping) involves the computational problem of constructing or updating a map of an unknown environment while simultaneously keeping track of a specific point within it.

The two companies have been collaborating informally for some time, across a range of application areas.  More than a dozen of these collaborations have been captured in a series of YouTube videos, among them 3D mapping, (San Jose, Calif.); localization in agriculture (3D SLAM in agricultural fields, alongside trees, with Velodyne LiDAR’s VLP-16 mounted on an ATV); airborne mapping using LiDAR (via an autonomous unmanned aerial vehicle); drone security zone (airborne security using a drone and LiDAR); driverless car, SLAM on fields (autonomous car using a single LiDAR sensor); and infrastructure surveillance with drone  (inspection of bridge infrastructure).

“We’re eager to work closely with Velodyne LiDAR to deliver the best solutions to emerging markets like real-time drone mapping and mobile robotics applications,” said Raul Bravo, CEO, Dibotics.  “We have applied our technology to a wide range of application fields in several industry segments all over the world, to achieve fully autonomous function, perception-enriched tele-operation or 3D modelization.  This partnership represents the next step in our evolution, and in the maturation of the technology.”

“Dibotics is the pioneer and world leader of a new kind of real-time 3D SLAM, based on the output of sensors like ours, so teaming up promises to be a boon to both companies,” said Erich Smidt, Velodyne LiDAR Europe Regional Director.  “Localization and mobile robotics represent major growth opportunities for us and for the industry as a whole, and we see Dibotics as complementing our LiDAR market leadership.”

Based in Paris, Dibotics was created in 2015 by Raul Bravo and Olivier Garcia in order to extend to new application fields the result of 15 years of world-class know-how and field experience working on GPS-denied and infrastructure-less navigation.  Dibotics’ technology is used as a core component of some of the most advanced products and companies in mobile robotics, operating in both indoor and outdoor environments.  Dibotics has developed and field-validated a unique 6 Degree of Freedom Sensor-Agnostic Localization technology, relying exclusively on the data originated from a single sensor: no odometry, IMU or multi-sensor fusion is needed.

Founded in 1983 and based in California’s Silicon Valley, Velodyne LiDAR Inc. is a technology company known worldwide for its real-time LiDAR (light detection and ranging) sensors.  The company evolved after founder/inventor David Hall competed in the 2004-05 DARPA Grand Challenge using stereovision technology.  Based on his experience during this challenge, Hall recognized the limitations of stereovision and developed the HDL-64 Solid-State Hybrid LiDAR sensor.  Velodyne subsequently released its compact, lightweight HDL‑32E sensor, available for many applications including UAVs, and the new VLP-16 LiDAR Puck, a 16-channel real-time LiDAR sensor that is both substantially smaller and dramatically less expensive than previous generation sensors. Market research firm Frost & Sullivan has honored the company and the VLP-16 with its 2015 North American Automotive ADAS (Advanced Driver Assistance System) Sensors Product Leadership Award. Since 2007, Velodyne LiDAR has emerged as the leading developer, manufacturer and supplier of real-time LiDAR sensor technology used in a variety of commercial applications including autonomous vehicles, vehicle safety systems, 3D mobile mapping, 3D aerial mapping and security.  For more information, visit www.velodynelidar.com.