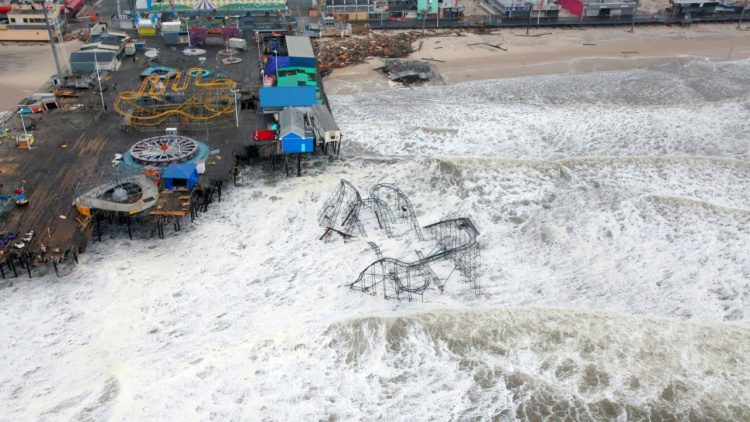 Scenes from Sandy were all the evidence needed to convince many metropolitan planning organizations (MPOs) that it was time to integrate climate change into the long-range planning process.

“MPOs throughout the U.S. have begun to identify goals and strategies to reduce the impacts of climate change through transportation adaptation initiatives,” says the University of Delaware’s Sue McNeil. “Evaluating the state-of-the-practice of adaptation planning and adaptation in support of mitigation is useful in that it helps identify gaps and areas for improvement.”

In 2014, McNeil and Michelle Oswald Beiler, who earned her doctorate in civil engineering at UD in 2011 and now teaches at Bucknell University, found themselves in the perfect position to assess the impact of Sandy on this type of planning.

Earlier in 2012, they had surveyed MPOs in the Mid-Atlantic region regarding their climate change adaptation practices as well as what they viewed as barriers to implementing these practices.

Surveying these same organizations again post-Sandy would enable them to see whether the superstorm had changed the awareness, beliefs, and practices of planners.

The findings of their comparative study appear in a paper published in Transportation Research Part A: Policy and Practice in May.

The work focused on the Mid-Atlantic region, where the primary climate change phenomena are an increase in very hot days and heat waves, rising sea levels, and an increase in intense precipitation events.

Adaptations — defined as “actions to reduce the vulnerability of natural and human systems or to increase system resiliency in light of expected climate change or extreme weather events” — were organized into four categories: infrastructure service changes and improvements, data and information, planning and evaluation, and coordination and cooperation.

Practices ranged from the use of high-occupancy vehicle (HOV) lanes, fuel-efficient vehicles, on-demand toll facilities, and bicycle and pedestrian facilities, to monitoring of rail and transit ridership, congestion, and vehicle miles traveled, to such issues as urban revitalization, ride-share programs, and community walkability.

“It was pretty clear to us when we analyzed the survey data that sometimes it takes a major event to get things moving,” McNeil says. “In terms of barriers, in particular, the difference between 2012 and 2014 was striking.”

Three barriers – limited understanding of risks, belief that there is too much uncertainty, and the perspective that climate change is not an immediate threat — all decreased substantially, suggesting, McNeil says, that the understanding and acknowledgement of climate change as a major issue is becoming more widespread across transportation planners.

However, agencies still identify resources and expertise as issues standing in the way of adaptation implementation.

“Overall, our results indicate progress in rural area and floodplain area designations, a growing interest in supporting collaboration and coordination efforts, and a high priority placed on issues like urban revitalization and walkability,” McNeil says.

With the four-year anniversary of Sandy now rapidly approaching, many communities still bear evidence of the storm’s ferocity.

As of spring 2016, work was still underway to rebuild the Rum Runner, a landmark restaurant in Sea Bright, New Jersey.

At the same time, in Sussex County, Delaware, a ceremony was held to mark the start of work on a 60-foot concrete-girder crossing that will carry a perpetually flooded road over a new drainage canal being built through the Prime Hook National Wildlife Refuge.

And in Staten Island, New York, 55 Sandy-damaged properties were put up for auction in a sale by the Governor’s Office of Storm Recovery, with bids starting at $14,650.

“Hurricane Sandy was a not-so-gentle reminder that climate change poses a continued and growing threat to freight and passenger transportation,” McNeil says. “The effects of this storm, many of which are still in evidence today, suggest that research on mitigation is timely and that adaptation is essential to the protection of coastal development and low-lying transportation infrastructure.”

Beiler is an assistant professor of civil engineering at Bucknell University in Lewisburg, Pennsylvania.

Marroquin, now a transportation engineer at AECOM in Denver, Colorado, worked on the project as an undergraduate at Bucknell under Beiler’s advisement.

McNeil is a professor in the Department of Civil and Environmental Engineering at the University of Delaware.