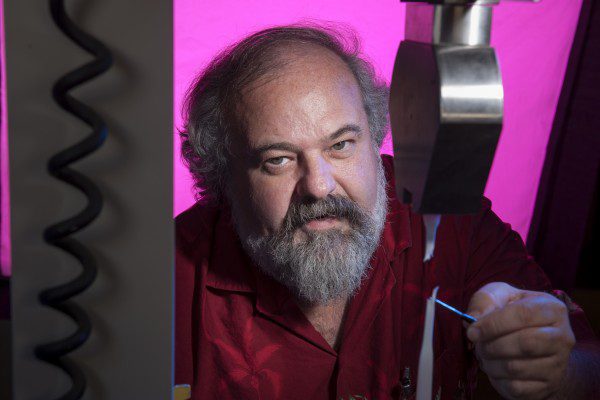 Imagine a material lighter than steel, longer-lasting than lumber and strong enough to support 120-ton locomotives. Now imagine that material is made from milk containers, coffee cups and other plastics that we recycle.

It’s called structural plastic lumber, and the ingenious, nontoxic material was invented by Thomas Nosker, an assistant research professor in the Department of Materials Science and Engineering and principal investigator in the Center for Advanced Materials via Immiscible Composite Materials at Rutgers University. The late Richard W. Renfree, Nosker’s graduate student who later became a Rutgers professor, helped invent the revolutionary material.

“People complain about plastics because they don’t degrade,” Nosker said. “We found a way to turn that to our advantage with a product.”

That product is increasingly used to build bridges on U.S. Army bases and elsewhere – docks, picnic tables, park benches, parking lot stops and other structures across America and overseas. It’s been used to make about 1.5 million railway ties in the U.S. alone. Since each tie weighs about 200 pounds, that means roughly 300 million pounds of plastics have not ended up in landfills, won’t choke marine life and won’t soil beaches.

Nosker, a prolific inventor, and his colleagues have been on the leading edge of plastics research for decades. They developed several types of structural recycled plastic lumber, a standard way to test plastic lumber, fire retardants for plastic lumber and machines to make plastic lumber. All told, Nosker co-holds 28 patents or patents pending in the United States, in addition to overseas patents, reaping millions of dollars in revenues for Rutgers.

Finding the key: The right mix of plastic

Thirty years ago, Nosker, now 59, was a doctoral student at Rutgers trying to deal with growing mountains of discarded containers. Plastics were rapidly replacing glass for packaging milk and soda – two high-volume grocery products — and ending up in landfills.

Nosker and others devised ways to sort, clean and process soda bottles made from polyethylene terephthalate (PET). They sold the material for a profit to make rugs and insulated jackets, stuff mattresses – even produce new soda bottles. Far more problematic was another type of plastic waste – known as high-density polyethylene (HDPE) – that was used to make milk containers.

“Prices for HDPE were so low that you couldn’t even afford to wash used milk bottles in preparation for recycling,” Nosker said. “But we couldn’t just turn around and throw it away. Plastics experts said it was potentially recyclable, and we wanted to work on that.”

Initially, Nosker and his colleagues tried making bottles into a substitute for chemically treated wood used in park benches and decks. But recycled HDPE planks sagged over time, when people repeatedly sat or walked on them. Some researchers tried combining HDPE with other plastics used to package foods and household goods, but had little success.

Then Nosker found a workable formula.

“We combined HDPE with polystyrene from old Big Mac containers,” Nosker said. At a specific proportion, the blended plastics gained strength because of the way tiny plastic particles interlocked.

Making the leap from creating strong recycled plastics to using them to build objects traditionally made of wood required an innovative show-don’t-tell strategy. For centuries, wood lumber from trees has been the go-to durable, flexible and affordable raw material for construction. But wood has its drawbacks; because it needs protection from insects, other animals and the elements, it is often treated with toxic preservatives that can leach into the soil, water and groundwater, posing risks to people, animals and plants. Structural recycled plastic lumber, which is mostly polyethylene reinforced with stiffer plastics or recycled composites like car bumpers, does not pose such risks.

So 18 years ago, Nosker and Richard G. Lampo, a materials engineer at the Construction Engineering Research Laboratory of the U.S. Army Corps of Engineers in Champaign, Illinois, built the first structural recycled plastic lumber bridge for vehicles at Fort Leonard Wood in Missouri.

“The industry was making a lot of picnic tables and park benches and those are good applications, but we were trying to push the envelope with our applications and do it cost effectively,” said Lampo, who recently visited the Fort Leonard Wood bridge. “It is holding up fine.”

Constructing bridges for the U.S. Army – and more

Today, Nosker’s invention is gaining popularity in environmentally sensitive areas where railroads cross streams, and where plastic tie durability is a plus. The Chicago Transit Authority, for example, found the plastic ties an economical choice for track rehabilitation on its elevated lines.

More recently, two active, rural Army bases wanted bridges for hefty loads. In Fort Bragg, North Carolina, where the Army has tank training grounds, bridges must carry heavy vehicles across numerous streams throughout the 160,000-acre base. The Army successfully demonstrated the first structural recycled plastic bridge to support a 73-ton M1 Abrams tank there in 2009, and has ordered 1,000 more plastic bridges for Fort Bragg and other sites.

Structural plastic lumber bridges also have been built at Fort Eustis in Virginia, as well as in civilian areas of California, Maine, Ohio, Scotland and other locales.

Nosker is proud of his role in trail-blazing plastics research. “I’m grateful that I’ve been able to have such a fun career,” he added.

And the best may be yet to come.

His team is developing light but super-strong graphene-plastic materials that could be used in next-generation tanks, personnel carriers, Humvees and civilian vehicles and products such as bicycles. Graphene comes from the graphite commonly used in pencils.

“I think the graphene stuff is going to eclipse the work in recycling,” Nosker said. “I might not be around to see people recognize that universally, but I think it’s a big discovery.”