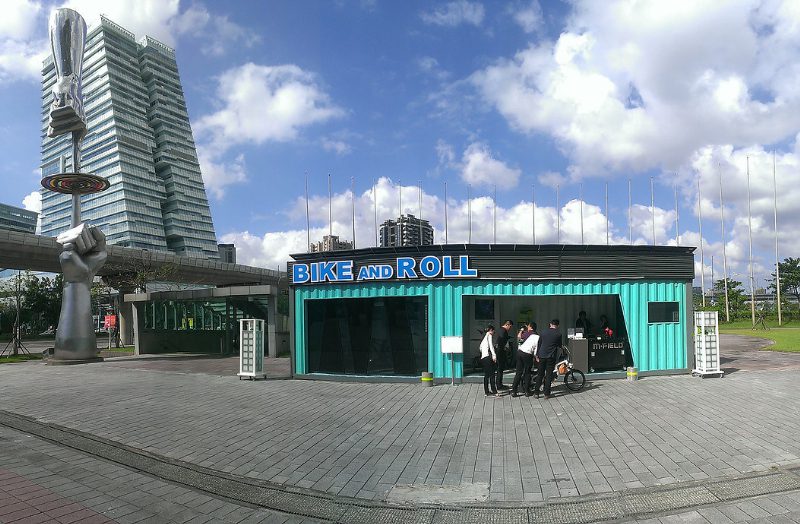 Basically, Skynergy is an installation that has been created from a standard shipping container that will actually serve as an electric-bicycle station, which will be run by the US bicycle rental and tour company Bike And Roll. On July 12, 2016, a handover ceremony will be held jointly with the GTPO; Bike And Roll; the Taiwan Economic and Cultural Office in New York; project partners UL and Asolar; and major manufacturing partners from Taiwan.

As a self-contained, self-sustaining power station, Skynergy is well suited to support disaster relief and humanitarian efforts, as well as various residential, retail, or recreational purposes, in places where power is unavailable. In addition, since it is housed in a standard shipping container, Skynergy is easy to transport via land, air, or sea.

Skynergy runs on high-power photovoltaic panels. For the NJ project, it features a photovoltaic module on the rooftop area of the container. These panels feed the station’s grid with electricity, with any excess electricity then stored in the onboard batteries, which are compact chambers of lithium-ion battery packs.

The station has also installed a hydrogen fuel cell to provide reliable backup power, in case of blackouts. Under normal conditions, the hydrogen fuel cell self-refuels, when a supply is maintained through the solar-power source. In total, this fuel cell can provide more than 8 hours of back-up power while operating at its maximum output.

Additionally, with the help of a smart-energy-management system, cloud-monitoring technologies have been implemented to help ease the burden on administrators who must face the challenge of overseeing the central control of scattered equipment. This helps to create fast and more efficient workflows between devices, which boosts productivity and saves energy.

In addition to consuming zero-energy from the grid, the station also features several innovative green products of note, such as an insulation coating; an energy-saving film for windows; solar bricks; a stone-like surface coating; floor mats made of recycled tires; and luminaries made of materials from discarded computers, among many others.

For further details, you may logon to Skynergy’s webpage: www.skynergy.net