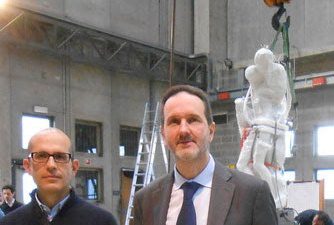 Viewed as his final sculptural masterpiece, Michelangelo was working on the unfinished marble statue when he died in 1564. Miyamoto’s Milan office was charged with the engineering and design for the development of an isolated support for the statue to protect it from earthquakes and traffic-induced vibrations. An underground metro line runs just below its location at the Ospedale Spagnolo of Castello Sforzesco.  Miyamoto was hired by the City of Milan, which owns the statue; Politecnic University of Milan was the scientific supervisor.

Miyamoto designed the isolated support for protecting the statue from overturning in a major earthquake. This technology essentially provides a roller between the statue and ground movement.  The isolation devices are manufactured by THK of Japan. Miyamoto performed complex analyses and supervised laboratory testing of a replica to assess the effects of vibrations and earthquakes on the entire assembly.

The $2.1 million (euro) seismic retrofit of the Pietà was featured on Discovery Channel’s “Daily Planet” show in 2015. A complete list of the 2016 winning projects, which come from 15 countries on five continents, is at the link below. The winners are “outstanding examples of the risks and rewards – and the hurdles overcome – of designing and building internationally,” the judges wrote.

“It was exciting to work on a challenging project that required innovative solutions to preserve this masterpiece forever,” Devis Sonda said of the Pietà.