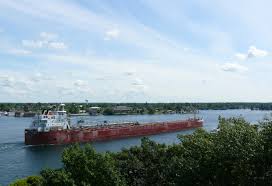 WASHINGTON – The Saint Lawrence Seaway Development Corporation (SLSDC) was recently honored for its environmental performance results for 2015, which demonstrated its continued excellence and leadership in environmental sustainability, by Green Marine, a North American environmental certification program.

“The men and women working in every mode of transportation at DOT have a deep commitment to improved sustainability,” said U.S. Transportation Secretary Anthony Foxx.  “We are proud to see the Saint Lawrence Seaway Development Corporation earn this year’s Green Marine certification, and look forward to their continued leadership and progress in this area.”

Green Marine is a voluntary organization which certifies environmental stewardship among the North American marine industry.  Participants include shipowners, ports, terminals, and shipyards based in the United States and Canada, as well as U.S. and Canadian Seaway corporations.

“The sustainability advantages of maritime shipping add up to a significant benefit for shippers and the public,” said SLSDC Administrator Betty Sutton.  “We are so pleased to have earned this certification of our environmental performance efforts during the 2015 shipping season.”

The SLSDC and its Canadian counterpart, the Saint Lawrence Seaway Management Corporation, chose to have their 2015 results published as a single entry in the Green Marine Performance Report, reflecting the bi-national nature of the Seaway and the two agencies’ close working relationship in pursuit of environmental excellence.  The partnership earned scores of 4.1 for Greenhouse Gases, Spill Prevention, and Community Impact, and earned a perfect 5 for Environmental Leadership.