/ Corporate / Arizona on Track for Federal Grant Advancing I-10 Improvements

Arizona on Track for Federal Grant Advancing I-10 Improvements 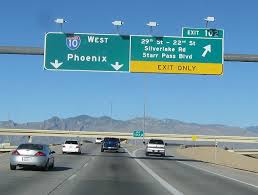 Arizona is on track to receive a $54 million federal grant helping fund two key widening projects, and adding traffic-management technology that includes a dust storm detection and warning system, along Interstate 10 between Phoenix and Tucson.

Formal notification of FASTLANE grants is expected after a 60-day congressional review period.

“This is a major step forward as ADOT continually works to improve the I-10 corridor between Phoenix and Tucson,” ADOT Director John Halikowski said. “This corridor carries as many as 120,000 vehicles per day, and about 30 percent of those vehicles are trucks. It’s a highway that is vital to freight traffic and the need to keep Arizona competitive by accommodating daily business and travel needs.”

The anticipated award is for three projects on I-10 between Phoenix and Tucson:

The U.S. Department of Transportation evaluated 212 applications from states requesting a total of $9.8 billion for transportation projects, more than 10 times the available funding.

The two I-10 widening projects in the FASTLANE grant are included in ADOT’s 2017-2021 Five-Year Transportation Facilities Construction Program, which the State Transportation Board adopted in June. These two projects were accelerated from ADOT’s six-to-10-year development program due to additional funding through the Fixing America’s Surface Transportation Act.

The 2017 budget signed by Governor Ducey included $30 million toward the I-10 widening projects, money that will be used as part of ADOT’s matching funds.

“We appreciate Governor Ducey and the members of the Arizona Legislature for supporting critical transportation projects in the state,” Halikowski said. “As one of Arizona’s Key Commerce Corridors, I-10 is an important route for travelers, commerce and international trade. This combination of state and federal funding will be a tremendous help to modernizing the highway.”

Once the two I-10 widening projects are complete, ADOT will have reached its goal of widening the entire stretch of I-10 between Casa Grande and Tucson to a six-lane divided highway.