World’s Largest Telescope to Be Placed on Chilean Mountain Top 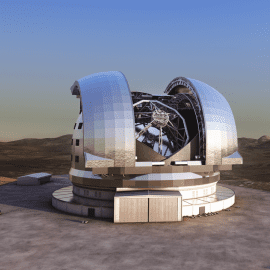 Take some of the world’s most sensitive astronomical instruments including more than 900 mirrors with a diameter of up to 4.5 meters – 798 of them are hexagonal and extremely vulnerable to changes in temperature and mechanical shock. Add some very advanced and innovative technology to compensate for atmospheric disturbances, wind and other factors and you have yourself a fragile package of goods.

All this has to be moved from factories in Europe to a mountain top in the Chilean part of the Andes – for a total price of almost 1.5 billion euros. Ramboll will control the logistics.

When the telescope is completed in 2024, it will be the largest ever made: the dome itself will be almost 100 meters in diameter – the size of the Colosseum in Rome – and as such it has been named accordingly as the ‘European Extremely Large Telescope’ (E-ELT). The primary mirror is 39.3 meters in diameter and will capture as much light as all the world’s telescopes today combined.

In a galaxy far far away

Located on top of Cerro Armazones in northern Chile, the telescope will gather eight million times more light than Galileo’s telescope of the renaissance era. It will enable astronomers to identify galaxies more than 13 billion light years away or search for life on planets around other stars in our own galaxy, The Milky Way.

The production time for mirrors and instruments is several years, and a potential casualty during the manufacturing process or in the logistics chain between the factory and the telescope would be disastrous.

In 2013, Ramboll was chosen as consultant for the procurement and construction process – and now European Southern Observatory (ESO) also wants Ramboll to identify, assess the risks and formulate a strategy for the logistic operation.

“Transporting such structures over land, sea and partly by air takes very sophisticated operations in itself. A large part of the mission has been to understand precisely how such a telescope works”, says Håvard Gaustad Harbo, Senior Management Consultant in Ramboll Norway.

He refers to the fact that many of the major components to the telescope have not even reached the drawing board yet.