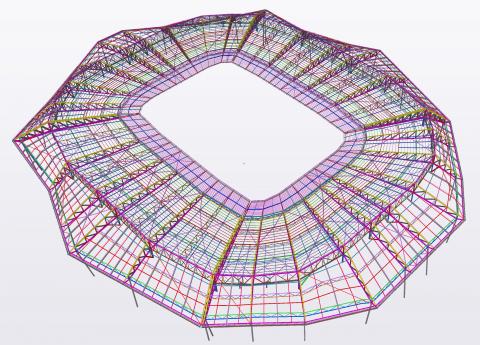 Tekla Structures had a big role in creating the stadiums that will host the Euro 2016 competition in France. Building Information Modeling (BIM) was used to model the Le Parc Olympique Lyonnais in Lyon, the Stade Velodrome in Marseille and the Matmut Atlantique stadium in Bordeaux.

This stadium located in southwestern France, was opened in May 2015. The stadium has a capacity of 42,000 seats and is built with steel instead of concrete. Built and operated by Vinci and Fayat Groups, the white rectangle is considered an architectural masterpiece. Tekla Structures was used here in realization of the constructive system of the stands, made up of gantry type of stability; architectural constraints require a thickness of reduced plenum and therefore complicated assemblies.

Built in 1937 and reconstructed four times, this stadium with 67,395 seats will host six matches in Euro 2016. The main changes in the renovation process included a roof and an increased number of seats. Horta Coslada was the metalwork constructor of the project. Currently the stadium has a height of 65 meters and covers a diameter of 250 meters. After a long process of modernization, Stade Vélodrome now is considered an elite stadium in Europe.

Six matches will be hosted at this modern stadium with a capacity of 59,000 seats. The construction of the stadium began in 2013 and lasted until end of 2015. The opening day was in January 2016. Cabinet Jaillet Rouby was involved in modeling the metal structure, while Martifier did the implementation study, manufacturing and lifting. This project also participated in Tekla BIM Awards 2014. A noteworthy feature of the stadium is the metal structure that supports the cover.