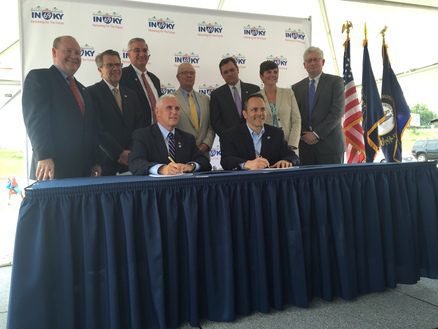 Henderson, KY – Indiana Governor Mike Pence and Kentucky Governor Matt Bevin today signed a Memorandum of Agreement to launch the I-69 Ohio River Crossing project. The states announced a combined commitment of about $17 million in their capital plans to advance project development.

“As the Crossroads of America, we know that roads mean jobs here in the Hoosier state,” said Governor Pence. “The partnership we are announcing today is a significant step in completing the vision of I-69 that will strengthen our transportation network and support economic investment and opportunity for generations of Hoosiers to come.”

Indiana and Kentucky will seek innovations from the private sector in expediting preliminary design and the required environmental review, with both states splitting costs and oversight. The MOA signed today authorizes the Indiana Department of Transportation to publish a formal request for proposals later this summer.

“I-69 is opening up Western Kentucky like never before,” said Governor Bevin. “Advancing the Ohio River Crossing will continue to build on that momentum. This additional north-south trunk will invite investment and spark further job growth in Kentucky. Our partnership will pay dividends for the entire Commonwealth.”

The environmental review and preliminary design will collect public input and study potential routes to connect the existing I-69 sections, the Robert D. Orr Highway south of Evansville and the upgraded Edward T. Breathitt Pennyrile Parkway south of Henderson. The review will also consider and collect public input on funding sources to build the project. Working cooperatively with the Federal Highway Administration, the states anticipate it will take about three years to complete the review and reach conclusions for the I-69 Ohio River Crossing route.

For additional information about the I-69 Ohio River Crossing project, visit: www.I69Crossing.indot.in.gov.

Interstate 69 is a key component to the future economic vitality of southwestern Indiana and western Kentucky, and will connect entire regions with improved access to jobs, education and health care.

Designated by the U.S. Department of Transportation as one of six Corridors of the Future, I-69 stretches across eight states between Michigan and Texas, with about 820 miles already open for business. When completed, it will be a primary north-south artery for the movement of goods and services in the United States.

Late last year, Indiana opened 27 miles of new highway between Bloomington and Naval Support Area Crane, and Kentucky added I-69 signs along 44 miles of the Pennyrile Parkway in Henderson, Hopkins and Webster counties.

In addition to the I-69 Ohio River Crossing, completion of the I-69 corridor in both states requires improvements to 53 miles of Kentucky’s Purchase Parkway from Fulton to Calvert City and 27 miles of Indiana 37 between Martinsville and Indianapolis.