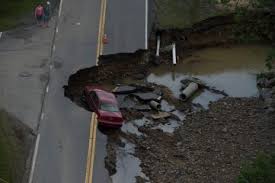 “West Virginia is a key part of the East Coast’s transportation network – making our efforts to open their roads and stabilize their bridges a national priority,” said Secretary Foxx. “We will do everything we can to help repair and reopen these routes quickly and safely, because the well-being of West Virginians and their economy is important to us all.”

Last week, a line of rainstorms saturated highways and bridges in 44 of the state’s 55 counties – which some meteorologists called a “once in a thousand year” storm. The damage stretches more than 200 miles from the state’s southern border with Kentucky and Virginia to the Pennsylvania state line. The heavy rains also caused damage to numerous National Park Service roads along the New River Gorge National River, and to roads managed by the U.S. Fish and Wildlife Service and the U.S. Forest Service, in the southern part of the state.

According to the National Weather Service, the state’s third-deadliest flooding event caused the Elkview River to crest at more than 33 feet, rising 27 feet in a single day, causing significant damage to roads, such as large mud- and rockslides, roadway erosion, culvert and bridge failures, and the closure of many routes. These funds will be used to immediately stabilize roads and bridges weakened by the floods, and begin repairs to other damaged facilities.

“These emergency funds will play a key role in helping workers start making repairs statewide,” said Federal Highway Administrator Gregory Nadeau. “We want to ensure that everyone in these 44 counties has access to safe roads and bridges.”

This initial “quick release” payment is considered a first installment on costs of making short-term repairs now which can make long-term repair work possible in the weeks ahead, which are estimated to top $20 million. The FHWA’s ER program provides funding for highways and bridges damaged by natural disasters or catastrophic events.