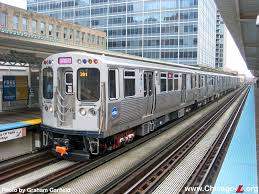 After 10 years and 50 million rides, officials from the Chicago Transit Authority today celebrated the 10th birthday of the Pink Line, which began service on June 25, 2006.

CTA President Dorval R. Carter, Jr., and CTA officials marked the celebratory occasion with a special ceremony at the Clinton Station before boarding a train fully wrapped in pink for a ceremonial ride through the Loop.

“Ten years ago we launched Pink Line service with the goal of providing more access to rail service to customers on the city’s West Side,” said CTA President Carter. “Since then, the Pink Line has provided 50 million rides and we are proud of the important role it has served in connecting people, jobs and communities.”

The CTA in 1993 adopted the color-coded system of all its routes. The Pink Line received its name following a “Name the Line” contest held by the Chicago Transit Board, which asked Chicago-area students to write an essay recommending a color for the CTA’s newest rail line and explain the importance of transit service to their community. More than 500 entries were submitted by students from kindergarten through eighth grade. The winning entry, written by then-7th grader Eleni Vrettos, was announced in March 2006.

Vrettos, who is now a 7th grade teacher in the Chicago area, joined the CTA today for the Pink Line’s birthday celebration. Her contest-winning essay a decade ago remarked that Pink was a befitting color for CTA’s newest rail line because pink is a “bright and lively and makes people jolly.”

Pink Line ridership has grown by 35 percent on the 54th/Cermak branch since the enhanced service was established in 2006 and reached a high of approximately 5.6 million in 2015.

In the decade that followed, the Pink Line got a new station: The CTA opened the Morgan Station, serving both Pink and Green line trains, in 2012. The station filled in a nearly 1.5-mile gap between the existing Clinton and Ashland stations and has since contributed to substantial residential and commercial development over the past several years.

The Pink Line has provided customers with increased and faster service and more connections to downtown. It also allowed CTA to increase frequency of service on the Forest Park branch of the Blue Line. Prior to the Pink Line, Blue Line trains traveling from O’Hare had to split service time via the two separate 54th/Cermak and Forest Park branches.