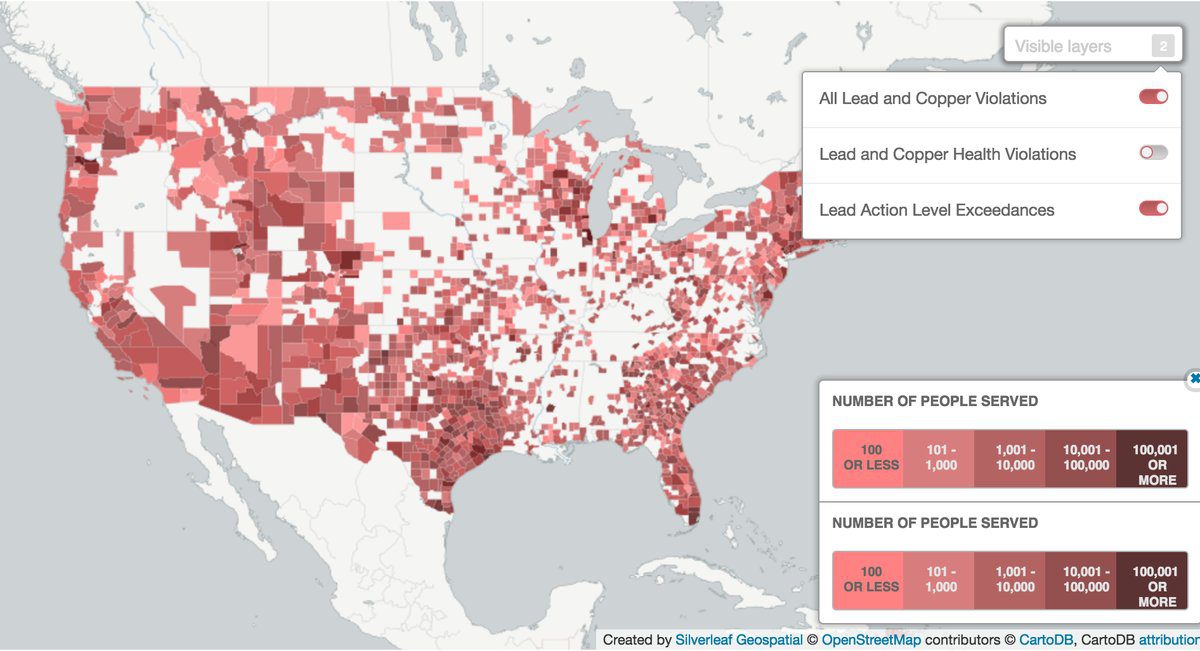 WASHINGTON —More than 18 million Americans got their drinking water from systems with lead violations in 2015, according to a groundbreaking Natural Resources Defense Council report. The problem could be significantly more pervasive because many more water systems known to have such violations — including that in Flint, Michigan — do not even show up as having lead violations in the government database designed to track such problems, according to NRDC scientists and health experts.

“Americans take it for granted that the water flowing from their home taps is clean and safe, but all too often that assumption is wrong. Shoddy data collection, lax enforcement of the law, and cities gaming the system have created a potent brew of lead violations and unsafe drinking water from the water supplies used by millions of people across the nation,” said Erik Olson, Health Program Director at NRDC. “And Flint doesn’t even show up as having violations for lead in the EPA’s drinking water tracking data, suggesting that millions more Americans could be at risk of drinking unsafe water but they aren’t even being tracked,” said Olson.

“What’s In Your Water: Flint and Beyond” documents the prevalence of lead in drinking water issues across America. The report offers a deep dive into the issues that contributed to widespread lead contamination in Flint, mapping Environmental Protection Agency violations for the federal Lead and Copper Rule, and documenting the lack of enforcement against those violations. NRDC’s analysis and its accompanying digital maps expose the scope of lead-related issues in drinking water systems across the United States. The report found more than 18 million people were served by 5,363 community water systems that violated the Lead and Copper rule. These violations included failure to treat to reduce lead levels, failure to monitor for lead, and failure to report test results to citizens or the government.

Not every person served by these systems is known to have excessive lead in their water, because only a small percentage of homes were tested, and lead levels can vary from home to home. However, industry estimates say that from 15 million to 22 million Americans are served drinking water through lead service lines (the pipes connecting a residence to the water main) that can release lead into tap water.

“A whopping nine out of ten of these water rule violations never faced any formal enforcement. In fact, states and EPA sought penalties against only 3 percent of lead rule violators. That’s inexcusable. The message sent to water suppliers that knowingly violate the law is clear: There is no cop on the beat,” said Olson.

Shockingly, Flint, the national poster city for devastating lead contamination of tap water, does not appear on the map of Lead and Copper Rule violations. Flint’s absence is a tipoff that the problem of lead-contaminated water is likely much, much broader than previously understood. EPA audits have long found that many drinking water violations do not show up in its database.

Another issue highlighted by NRDC’s peer-reviewed report is that water systems can use testing methods to avoid detecting lead problems. In cities like Flint, Chicago, and Philadelphia, where localized lead spikes may put the public at risk, officials allegedly have “gamed” water testing in ways that may obscure lead contamination. For example, systems can monitor in locations less likely to have lead problems rather than in the highest risk homes, or can use water sampling methods that minimize the chance of finding high lead levels. After years of complaints about these questionable techniques, EPA finally issued a “guidance” document at the end of February 2016 discouraging these methods, but untold numbers of cities have long used them.

“The bottom line is that lead is found in drinking water in cities well beyond Flint, often affecting vulnerable lower-income communities of color. Unsafe drinking water is a national problem that needs a national solution,” said Rhea Suh, NRDC’s president.

A top priority for NRDC is addressing the ongoing water crisis in Flint, where residents still do not have access to safe tap water more than two years after lead began leaching from water pipes. Alongside local partners, NRDC filed a lawsuit in federal court, seeking to bring Flint into compliance with federal law governing safe drinking water and replace Flint’s lead service lines. Beyond addressing that situation, the report highlights a number of major changes needed at the national level to protect the health of millions of Americans from lead-contaminated water, including:

“What’s In Your Water: Flint and Beyond” and its companion searchable interactive map are available online with a number of supplemental documents explaining the issues at play, as well as steps communities and homeowners can take to protect themselves from lead tainted drinking water at https://www.nrdc.org/stories/whats-your-drinking-water.

The Natural Resources Defense Council (NRDC) is an international nonprofit environmental organization with more than 2 million members and online activists. Since 1970, our lawyers, scientists, and other environmental specialists have worked to protect the world’s natural resources, public health, and the environment. NRDC has offices in New York City, Washington, D.C., Los Angeles, San Francisco, Chicago, Livingston, Montana, and Beijing. Visit us at http://www.nrdc.org and follow us on Twitter @NRDC.